An excerpt from George P. Hansen’s The Trickster and the Paranormal. 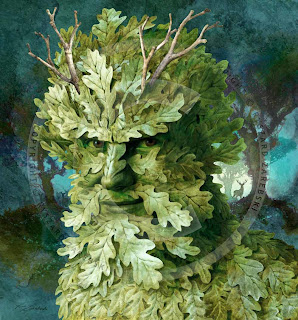 COMMENT: Over a decade ago, when I first became deeply acquainted with Sufi literature, one recurring figure struck a discordant note amongst the beautiful stories of mystical gnosis: this was the character known as Khidr. Considered to be an immortal prophet, Khidr (“the Green One”) appears in Sufi literature as an irrational and capricious figure making apparently arbitrary decisions, decisions which often have disastrous consequences for those he comes into contact with. This character was a constant source of disturbance for me at this time, but also a source of fascination as I could never fathom his true role or purpose. Now, after reading George P. Hansen’s marvellous book “The Trickster and the Paranormal” (2001), the archetype represented by Khidr has come sharply into focus, as have the broader conventions and prohibitions that this trickster habitually violates. The following discussion is an excerpt from Hansen’s book. Here, the Trickster archetype is examined in worldviews characteristic of “primitive” (i.e. non-literate) peoples. As Hansen says, the Trickster represents the anti-structural forces which blur binary oppositions and bring liminal (intermediate, threshold) conditions to light. Enjoy.

Turner notes “that liminal situations and roles are almost everywhere attributed with magico-religious properties . . . [and these are] often regarded as dangerous, inauspicious, or polluting to persons, objects, events, and relationships that have not been ritually incorporated into the liminal context.” He explains that: “all sustained manifestations of communitas . . . have to be hedged around with prescriptions, prohibitions, and conditions.”  The sacred is surrounded by taboos, and there are innumerable examples.

Anthropologist John Middleton investigated binary classification schemes among the Lugbara of Uganda and found that breaches of the schemes are regarded as uncanny and dangerous. He tells us:  “The confusion of order and disorder is seen as the confusion of authority (which is seen as moral, responsible, controlled and predictable) and power (which is amoral, perhaps immoral, irresponsible, uncontrollable and unpredictable). The people associated with this confusion have in common the characteristic of themselves being incomplete and so representing the essential nature of disorder itself. These people are diviners, prophets, witches, rainmakers.” David Hicks reports in his book Tetum Ghosts and Kin (1976) that similar patterns were found in Indonesia. Persons ambiguous in binary classification schemes (e.g. hermaphrodites) were viewed as having supernatural power.

Cambridge anthropologist Edmund Leach has given some of the best exposition of the issues. His 1962 essay “Genesis as Myth” notes that God-man is a major opposition, and he explains that “’Mediation’ (in this sense) is always achieved by introducing a third category which is ‘abnormal’ or ‘anomalous’ in terms of ordinary ‘rational’ categories. Thus myths are full of fabulous monsters, incarnate gods, virgin mothers. This middle ground is the liminal, the interstitial, the betwixt and between, the anti-structural; it provides contact with the supernatural realm.

The same issues are found in religion today, and the writings of religious scholar Rudolf Otto illuminate these matters. In his seminal work, The Idea of the Holy (1917), he explores the concept of the “numinous,” a realm peculiar and unique to religion. Otto explains that this domain is an objective reality and not just a subjective feeling, though it has nothing to do with the rational. A primary function of religion is to deal is to deal with this aspect of existence. Otto explicitly recognizes that miracles come from the numinous. The numinous evokes an awe and fascination with an extra-rational power, the mysterium tremendum. But there is a negative aspect, sometimes referred to as the wrath of God. Otto notes that “this ‘wrath’ has no concern whatever with moral qualities...It is ‘incalculable’ and ‘arbitrary’; it is encountered in the “grisly”. There is a duality to the divine.

Otto notes that a much-subdued experience of this wrath is seen in the fear of ghosts. Ghosts are liminal (interstitial) creatures. They exist in the netherworld between life and death, and they challenge the idea that there is a clear separation between the two. The dread evoked by such beings can be profoundly disturbing. Surprisingly, parapsychologists have largely neglected this, but folklorists have drawn attention to it. William Clements’ papers “The Interstitial Ogre” (1987) and “Interstitiality in Contemporary Legends” (1991) give a helpful introduction. Linda Degh and Andrew Vazsonyi noted that encounters with such entities raise primal questions such as “Is there anything one can hang onto? Is there a solid basis on which one can base one’s trust in this confusing universe...? It is not the individual who is separated from his ‘security base’...The world itself has lost its protective familiarity.” It is precisely this that evokes such intense hostility to claims of the paranormal by some, and extreme anxiety in others, though it is rarely recognized consciously.

British anthropologist Mary Douglas addresses perils of the liminal in her frequently cited book Purity and Danger (1966). Speaking of restrictions and taboos, she says “some are intended to protect divinity from profanation, and others to protect the profane from the dangerous intrusion of divinity. Sacred rules are thus merely rules hedging divinity off, and uncleanness is the two-way danger of contact with divinity.” The supernatural’s intrusion must be limited. Douglas later comments: “Ritual recognizes the potency of disorder. In the disorder of the mind, in dreams, faints and frenzies, ritual expects to find powers and truths which cannot be reached by conscious effort. Energy to command and special powers of healing come to those who can abandon rational control for a time.” In disorder comes power, too, in disorder is danger.

Even though many other scholars could be quoted about the supernatural dangers associated with liminal conditions, scientists today pay them little heed.  Such ideas are viewed as quaint superstitions. Any scientist who took them seriously would invite derision, and loss of status. Understandably, parapsychologists rarely discuss these potential risks of their work.

All this is directly applicable to the trickster because he is a denizen of the interstitial realm, and a few analyses of the trickster give clues to the dangers. Laura Makarius’ discussions are some of the most disturbing. She called attention to the peculiarities and incongruities so frequently encountered in trickster tales and commented that “they have been introduced for the express purpose of concealing some secret fact striving for expression.” Explicit recognition of this is crucial to deciphering the meaning, and then she goes on to say: “What that hidden fact is, it is the goal of the student of folklore to discover. But he cannot do so without a knowledge of that deeper contradiction in the behaviour of primitive peoples between what they may do and what they may not. The contradiction manifests itself when forbidden acts are committed for the same basic reasons for which they are forbidden. That is why they express themselves only if at the same time they are suppressed...The deliberate violation of taboo constitutes one of the deepest contradictions of primitive life. Its purpose is the obtainment of magical power.”
Postado por david montoute às 02:38 Nenhum comentário: