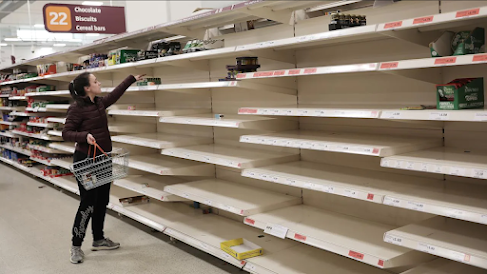 BoE Governor Andrew Bailey expressed concern over a further spike in food prices due to Ukraine’s inability to ship wheat and oils from its warehouses due to a Russian blockade. The besieged eastern European country has been under attack by its larger neighbor since late February.

The BoE governor added that he had previously spoken to Ukrainian Finance Minister Sergii Marchenko on the matter.

“The [risk] I’m going to sound rather apocalyptic about, I guess, is food. Ukraine does have food in store, but it can’t get [it] out at the moment. While [Marchenko] was optimistic about crop planting, he said: ‘At the moment, we have no way of shipping it out as things stand, and it is getting worse,” the governor told ministers of parliaments (MPs) in the House of Commons Treasury Committee. “That is a major worry. It is not just a major worry for this country … [but also] for the developing world.”

“I am by no stretch of the imagination a military strategist, but whatever can be done to help Ukraine get its food out would be a huge contribution,” added Bailey.

Furthermore, the governor said he felt helpless to control inflation, which was rapidly pushing energy and food prices to exorbitant levels. The price hikes are at their fastest rate in 30 years and are expected to worsen in the coming months – culminating with a double-digit rise in inflation before 2022 ends.

“It is a very, very, more than uncomfortable – I am trying to think of a word that is even more severe than that – it is a very very difficult place to be. To forecast inflation and to say there is not a lot we can do about it, I can tell you: It is an extremely difficult place to be. We have to recognize the reality of the situation we face,” said the governor of the U.K.’s central bank.

Reuters recently reported that infrastructure problems and blocked seaports have prevented about 25 million tons of grain from leaving Ukraine. (Related: Millions of tons of harvested grain are currently stuck in Ukraine due to war as global hunger crisis deepens.)

Ukraine is a major supplier of grain for many countries. As per data from the International Grains Council, the country was the world’s fourth-largest exporter of corn and the sixth-largest exporter of wheat for the 2020-2021 growing season. Russia’s continued supply blockade, however, prevents it from sending grain to markets.

Josef Schmidhuber of the United Nations’ Food and Agriculture Organization (FAO) said during a virtual press briefing: “It’s an almost grotesque situation we see at the moment in Ukraine, with nearly 25 million tons of grain that could be exported – but cannot leave the country simply because of lack of infrastructure [and] the blockade of the ports.”

Schmidhuber, the deputy director of the FAO’s markets and trade division, added that the full-grain silos in Ukraine could result in a shortage of granaries for the next harvest in July and August. “Despite the war, the harvest conditions don’t look that dire. That could really mean there’s not enough storage capacity in Ukraine, particularly if there’s no wheat corridor opening up for export.”

The FAO official’s remarks appeared to line up with those by Ngozi Okonjo-Iweala, the director-general of the World Trade Organization, regarding food prices.

“It would really help the world if we could evacuate this grain [from Ukraine]. There’s a serious risk of food prices going up and spiraling out of affordability that could lead to more hunger,” she said.