Injected nano-networks integrated into the human body. An extraordinary dossier prepared by a Spanish engineer 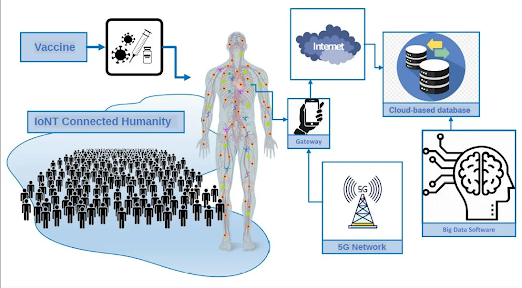 If this illustration is definitely validated, we can conclude that a number of injected humans are in the process of mutating into transhumans. It can be assumed that several doses are required to reach the final phase of the model.

IoNT is the Internet of Nano Things. The nanoparticles they bombard you with end up speaking for you. In this illustration, a very high-level scientist has written a very professional and detailed document that places the human injected into the IoNT circuit. If this illustration is definitely validated, we can conclude that a number of injected humans (not necessarily all of them) are in the process of mutating into transhumans. It can be assumed that several doses are required to reach the final phase of the model.

Warning: The file transmitted here is exceptionally well documented and accurate. I return to it to enrich the reflection and the working hypothesis around the transhumanisation of peoples. However, as long as our health authorities refuse to carry out independent analysis of the content of the vials, we will not be able to state whether, and to what extent, the list of undesirable elements listed in this document have contaminated the industrial produced shots given over the last year.

A leading scientist has uploaded onto the Internet detailed pictures of what could be the different, unidentified elements found in the vials of products to be injected and / or in studied blood samples. His work was sent to me by another equally reliable scientist.

Although I do not know the identity of the author, I can only appreciate the precision with which the different elements that we have been revealing for months (if not years) are arranged and integrated into his presentation. 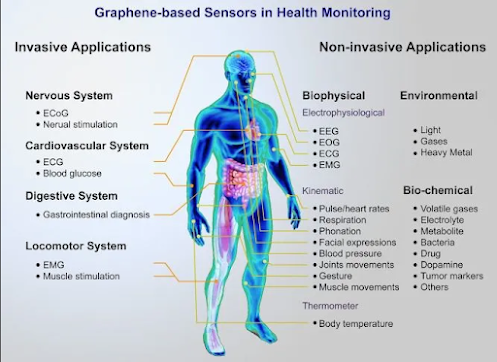 You will notice the reference to graphene oxide quantum dots that we talked about recently. 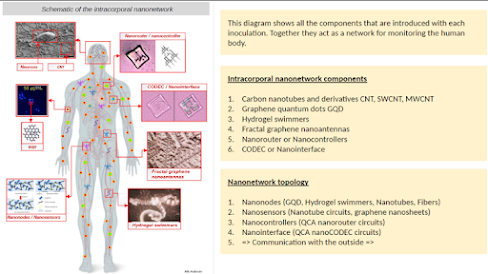 This diagram shows all the components that are introduced with the different inoculations. Together they act as a surveillance network for the human body. (translation below)

Components of the nanogrid to the intracorporeal plane 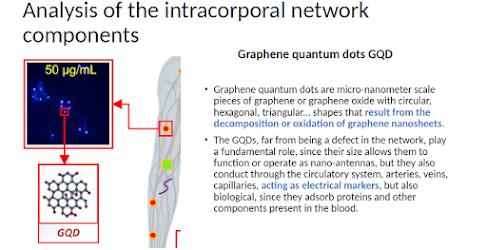 - Graphene quantum dots are pieces of graphene or graphene oxide on a micronanometric scale with circular, hexagonal, triangular shapes, which result from the decomposition or oxidation of graphene nanoblades.

- GQDs, (graphene quantum dots), far from being a network defect, play a fundamental role, since their size allows them to function or operate as nano-antennas. In addition, they travel through the circulatory system, arteries, veins, capillaries, serving as electrical and also biological markers, since they absorb proteins and other components present in the blood.

The human-machine interface with data transmission 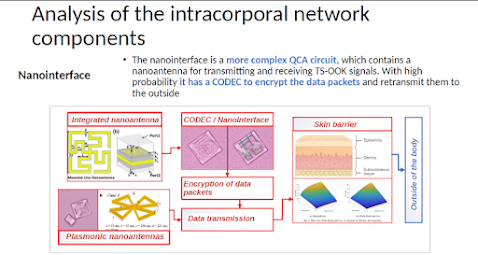 The nanointerface is a more complex QCA circuit, containing a nano-antenna to transmit and receive TS-OOK signals. With a high probability, it has a CODEC to encrypt the data packets and retransmit them outside. 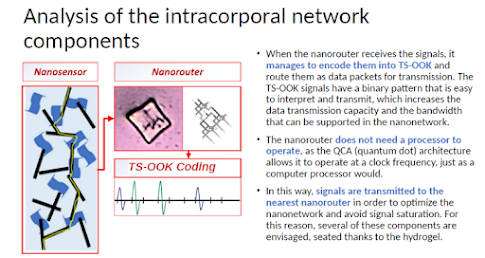 - When the nanorouter receives the signals, it manages to encode them in TS-OOK and route them in the form of data packets for transmission. TS-OOK signals have a binary model that is easy to interpret and transmit, increasing the data transmission capacity and the bandwidth that can be supported on the nanogrid.

The nanorouter does not need a processor to function, since the QCA (quantum dot) architecture allows it to operate at one clock frequency, just like a computer processor would.

- In this way, the signals are transmitted to the closest nanorouter in order to optimise the nanonetwork and avoid signal saturation. For this reason, several of these components have been provided, arranged thanks to the hydrogel.

With this document, we enter fully into the human-machine integration process. We see from this set-up that the result corresponds to the NBIC convergence. The author of these plates knows precisely what it is about. In fact, very few scientists have a global vision of what transhumanism could look like.

Are we being chipped?