The WHO pandemic treaty: a backdoor to global governance? 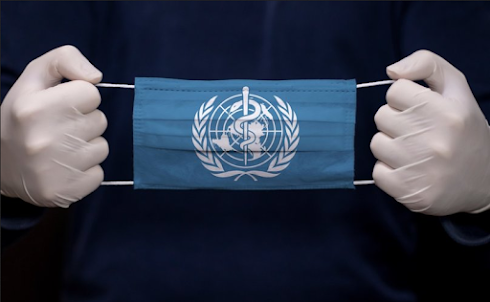 You may already have heard the rumour mill working overtime on what appears to be a dastardly plan by the World Health Organization (WHO) to become the seat of global governance.

We’ve endeavoured in this piece to come to a view on this.

Does a ‘pandemic treaty’ equate to global governance?

The WHO did this by unanimous agreement among its 194 member countries at only its second-ever Special Session of the World Health Assembly (WHA) since the WHO’s inception in 1948, on 1 December 2021.

The WHA Special Session was recorded and streamed and is available for viewing here.

The reality is the precise form of the instrument that will be used is as yet undecided. It may be through strengthening the existing International Health Regulations (2005), negotiating a ‘pandemic treaty’ as an amendment to the WHO Constitution, or, more likely, both. Control will be delegated to these instruments in the event that the WHO declares a global pandemic. As we’ve seen, this can be done rather easily – even if there appears to be no scientific or medical justification – the very situation we find ourselves in now.

There is broad support from powerful members of the WHO, including the USA and the European Commission, through president, Ursula von der Leyen. In fact, it is the USA that will lead the negotiations in trying to build consensus on the approach. All biding well for a good relationship with Biden, whether or not he was the genuine choice of the U.S. people.

The difficulty for many rational and critical thinkers is that the crisis delivered to the world in the name of ‘Covid-19’ is not an adequate precedent for such actions that have the capacity to limit freedoms to an even greater extent than we’ve seen during the last two years. Especially when the WHO can call a pandemic more or less arbitrarily.

Let’s dissect this manipulation by looking at just a few statements made by WHO’s director general, Tedros Adhanom Ghebreyesus, at the World Health Assembly special session. Dr Tedros’s statements below are marked ‘TG’, and our responses to each marked ‘ANH’. 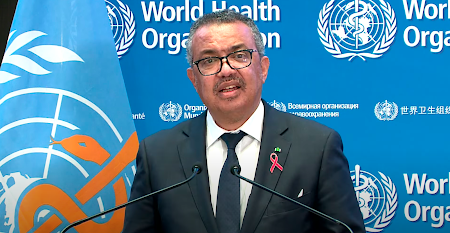 TG: The emergence of the highly-mutated Omicron variant underlines just how perilous and precarious our situation is.
ANH: The high transmissibility of a variant does not determine its risk to humanity.

TG: South Africa and Botswana should be thanked for detecting, sequencing and reporting this variant, not penalized.
ANH: Tedros gives the impression, as circulated by the mass media, that South Africa and Botswana were the source of omicron. This is likely a ruse to place maximum pressure on jab-resistant African nations. Detailed phylogenetic analysis has revealed, as published in the journal Nature , that omicron is genetically distinct from other South African variants of the shared lineage and was found by retrospective analysis elsewhere (England, USA) in early November, about three weeks before the southern African findings hit the airwaves.

TG: Indeed, Omicron demonstrates just why the world needs a new accord on pandemics.
ANH: We argue the exact opposite: that omicron has acted as a kind of natural ‘vaccine’ by allowing large numbers of people to gain robust immunity quickly. None other than Bill Gates, the second biggest funder of the WHO, said something not dissimilar: “Sadly, the virus itself, particularly, the variant called omicron, is a type of vaccine, that is, it creates both B-cell and T-cell immunity, and it’s done a better job getting out to the world population than we have with vaccines”. If natural immunity does better than ‘vaccines’ and novel ‘vaccines’ are going to be the primary intervention in responses, why would any country want to prioritise pandemic responses that place novel ‘vaccines’ at the pinnacle of these efforts?

TG: We are living through a cycle of panic and neglect.
ANH: One can ask who has created the panic and what and who have been neglected? We know Tedros is referring to fear over successive waves and variants of SARS-CoV-2 but imagine what might have happened had there been no molecular detection of the virus in the first place, no whipping up of fear designed by behavioural scientists working with global and national PR agencies, and if natural immunity had been allowed to run its course much quicker with a Great Barrington type response.

TG: And we cannot end this pandemic unless we solve the vaccine crisis.
ANH: But how do you get to this conclusion, Dr Tedros? We appear to be emerging from the crisis that is of your creation because natural immunity is allowed to work, because no masking, social distancing or isolation, let alone any of your therapeutics, least of all your fast-tracked ‘vaccines’ have been working to stem transmission. Omicron has ripped through the world doing much less harm than its predecessor variants, regardless of ‘vaccination’ status. And in its wake left a healthy trail of natural immunity. 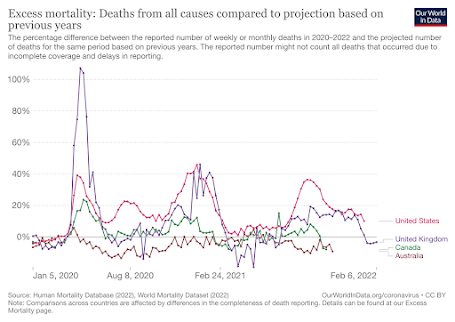 TG: More than 80% of the world’s vaccines have gone to G20 countries; low-income countries, most of them in Africa, have received just 0.6% of all vaccines.
ANH: Dr Tedros’ blind, unscientifically-based desire to see most of the less developed countries that have suffered, in the main, very little in the way of hospitalisations and deaths from SARS-CoV-2, makes no sense if the health of the people of the world were the real objective. Most of the burden of disease has been in the wealthy countries where people suffer more metabolic diseases and underlying conditions that this particular virus exploits with targeted precision. It seems that the puppet masters have determined as many people in the world need to be vaccinated, regardless. That includes the youngest and most vulnerable in all societies, to those in Sub-Saharan Africa who have many much greater concerns, such as food security and diseases like malaria and tuberculosis. And of course AIDS – but more on that from us next week.

TG: The longer vaccine inequity persists, the more opportunity this virus has to spread and evolve in ways we cannot predict nor prevent.
ANH: There is no evidence to support this statement. There is, however, ample evidence to support the view that the longer steps are taken to avoid populations developing natural immunity (e.g. lockdowns, social isolation, social distancing) and the more interventions, such as covid-19 injections, disrupt the ability of our immune systems to develop that durable, robust immunity, the more opportunity the virus has to spread. 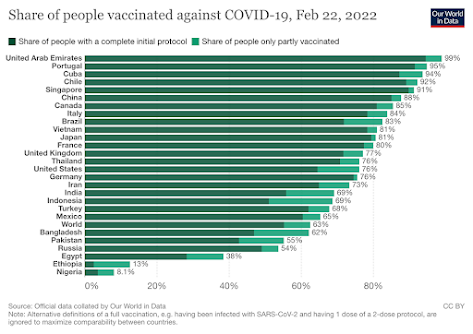 TG: We call on every Member State to support the targets to vaccinate 40% of the population of every country by the end of this year, and 70% by the middle of next year.
ANH: Pray tell us, Dr Tedros, the scientific basis on which you’ve determined these figures? Is this based on omicron and current covid-19 injections? Surely not!

TG: 103 countries still have not reached the 40% target, and more than half of them are at risk of missing it by the end of the year, mainly because they cannot access the vaccines they need, and most of them in Africa.
ANH: Most of the countries that haven’t reached this target haven’t had a serious problem with covid-19. Probably more importantly, no country currently has a severe covid-19 problem, courtesy of omicron and ever increasing levels of natural immunity.

TG: Vaccines save lives, but they do not fully prevent infection or transmission. Until we reach high levels of vaccination in every country, suppressing transmission remains essential. We don’t mean lockdowns, which are a last resort in the most extreme circumstances. We mean a tailored and comprehensive package of measures that strike a balance between protecting the rights, freedoms and livelihoods of individuals, while protecting the health and safety of the most vulnerable members of communities.
ANH: Well, finally, there’s a single point of agreement: these ‘genetic’ vaccines have certainly not done much to stop transmission, and not at all in the case of omicron. But lockdowns were far from the last resort. They were the first resort back in early 2020. A top-down “tailored and comprehensive package of measures” seems akin to a surprise package received from a company that’s got a reputation for supplying dud goods. Are we to seriously believe the pandemic elite in Geneva, or their minions like Trudeau, Merkel, Macron, Biden and Morrison understand the meaning of the word ‘balance’ especially when applied to unalienable human rights and freedoms?

Believe it or not, there’s more. But the reality is, as exemplified by the non sequiturs offered by Dr Tedros, there is absolutely no basis on which to use the covid-19 crisis to impose a ‘pandemic treaty’ that will bolster even more centralised power in the event of continued or new so-called ‘pandemics’. It has become ever more clear that governments have deliberately attempted to engender fear in their populations, that they have unfairly and disproportionately denied or restricted long-standing and hard-won liberties among millions, and imposed authoritarian control over populations. The fact that pandemic responses and restrictions have not been lifted entirely with the dominance of omicron suggests the agenda is not as proposed.

Could the plan for a WHO ‘pandemic treaty’ fail?

Some who support the vision of a global pandemic treaty built into the WHO Constitution, think it might fail.  They argue current international legal and national enforcement frameworks are inadequate, and some countries who don’t wish to receive ‘vaccine’ donations will put their own geopolitical interests ahead of the ‘global interest’, whatever that might be.

If the pandemic treaty were to come into effect in 2024, you can guarantee even higher global health surveillance using real-time sequencing for both diagnostics and epidemiology. This would be based on ever-more portable technologies with increasingly rapid turnaround times.

But don’t just think mRNA injections or intranasals. Or gene editing technologies based on CRISPR for diagnostics. Think CRISPR to enhance the immune response will likely see an entry. This is a facet of transhumanism, as is digital surveillance.

To put it in the words of Klaus Schwab, founder of the World Economic Forum, there will be further attempts to fuse “the physical, digital and biological worlds, impacting all disciplines, economies and industries, and even challenging ideas about what it means to be human.”

Following are just four things we’ve learned from this so-called pandemic, that suggest an even more rigidly, and constitutionally, controlled global response, would be entirely counter productive to the health of the people:

What can we do?

You could do nothing and let Klaus Schwab and Trudeau’s vision become a reality for future generations.

Or we can oppose every part of it that works contrary to what we see as the natural essence of humanity and the natural order of Nature.

So here’s our top 5 suggestions: