Dr. Monteverde: 'Medical Schools will have to rethink everything from now on' 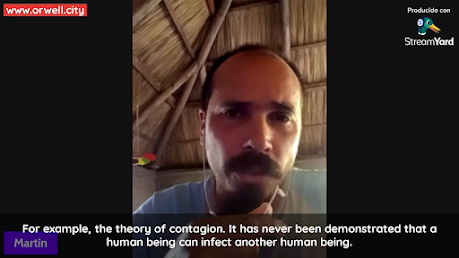 Since the very moment graphene oxide and nanotechnology were found in vaccination vials, many medical professionals agree that a turning point was established in the history of medicine.

There is a knowledge that hasn't been shared with those who have gone through the Schools of Medicine, a knowledge that has been hidden by those who want to subdue the population and force them to consume certain types of medicines and to be vaccinated against their will, leaving aside that there are other ways to exercise the art of healing.

In a new program by Fritz Iribar, La Fuente, Dr. José Luis Gettor and Dr. Martín Monteverde shared their views on the changes that should be made in the Health area.

Dr. José Luis Gettor: I believe that physicians have to change their mindset and realize that we have been deceived. We've already been deceived in the universities. Already the teachers of our teachers' teachers were teaching a contaminated medicine.

Fritz Iribar: Doctor, then we can say that all the courses in the universities...  I mean, there must be an educational reform in terms of medicine.

Dr. José Luis Gettor: Completely. Completely, Fritz. Completely. Also, because we're Westerners, we believe that there's only one medicine, but there are a lot of types of medicines. Chinese, homeopathic, Germanic, Ayurvedic. There are many variants of the art of healing. And we believe that we are the Mecca of science. And it's absolutely the opposite.

Fritz Iribar: Speaking of the different medicines, we have here Dr. Martín Monteverde, who's also a homeopathic physician, right Martín?

And yes, the truth is that I totally agree with what José Luis said in the sense that medical schools will have to rethink everything from now on. Because very, very important things that we are taught in medical school would be wrong.

For example, the interpretation of viruses. For example, the theory of contagion. It has never been demonstrated that a human being can infect another human being. For example, the theory of malignant cells and cancer. The theory of metastasis. That, according to official medicine, a malignant cell can travel from one part of the body to another part of the body and do damage. This has never been scientifically corroborated. That's to say, neither have been many of the statements that have been made in terms of immunology, antibodies, markers...

So it seems, to me, that the main concepts of medical school will have to be revised. And not to mention the hole that exists in terms of how the emotional part, the biological conflicts, the emotional conflicts that the human being goes through make our brain turn on programs in the body. Survival programs that bring symptoms. So, all that emotional part that, unfortunately, official medicine denies... We'll finally have to study all that part. And surely, we'll start by seeing if what happens to other mammals also happens to us.