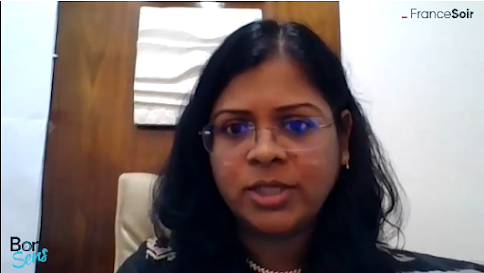 We welcome the return of Dipali Ojha, a lawyer at the Mumbai District Court and the Supreme Court of India, as well as a member of the Indian Bar Association.

Since August 2021, the IBA has been challenging official notices banning anyone who has not received two doses of the vaccine from frequenting shopping malls, working from their office or using the railways which are so fundamental to the Mumbai region. These discriminatory notices are in violation of the Indian Constitution.

However, the High Courts of the northeastern states have spoken out against this discrimination between the vaccinated and non-vaccinated, by recognising that the former are can also be carriers of the virus or possible “super-spreaders”, and thus obliged to take the same protective measures.

In addition, only a very small minority of Indians - 9% - have taken two doses of the vaccine, and 50% a single dose. Discrimination is therefore in favor of a tiny minority. In view of the side effects, millions of Indians no longer believe the official story and no longer want to hear about the second dose. The IBA has been bombarded with requests for legal assistance to challenge the forced vaccination measures. Last week, for example, a group of teachers from Maharashtra state came to the IBA with an official notice presented to them around August 27th urging them to accept a second injection before September 5th.

Ivermectin is overwhelmingly prescribed by doctors in India, despite a hostile propaganda campaign that discourages them from talking about it.

Regarding the complaint against a group of senior WHO officials including Chief Science Officer Soumya Swaminathan, brought by an NGO and supported by the IBA, a copy was sent to the President and Prime Minister of India who confirmed receipt and followed up by a senior official.

Now the IBA cooperates with an NGO, Awaken India Movement, and with Doctors for Truth which demands an immediate end to the vaccination campaign.

A report offered in partnership with BonSens.org: