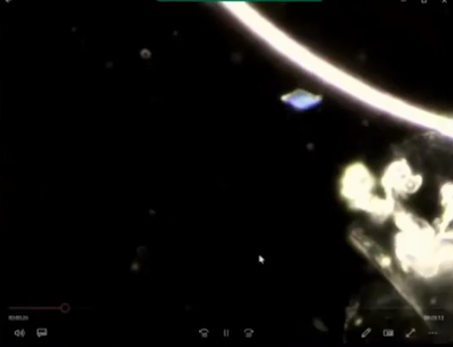 Since we proved vaccine-induced magnetism in May 2021, Dr T and the Not On The Beeb team have been calling for help from the medical and scientific community in the recognition of undisclosed ingredients and undisclosed biotech.

The machinery of creating professional lead proof is gaining momentum.

First we had Dr Campra release his findings of what apears to be Graphene Oxide within the Pfzier vaccine.

Then, we had the work of The Scientist Club, which Dr Young later made famous.

This has now been folllowed by German scientists and doctors presenting their findings via a mini press conference at the Pathological Institute in Reutlingen.

Social media and streaming platforms quickly banned the videos (watch below), yet again proving they are colluding with those committing the crimes against humanity that the press conference was exposing.

QUOTE: "...Undeclared metal-containing components were found in the vaccine. Visually, vaccine elements are conspicuous by their unusual shape....which are in line with the findings of scientists from Japan and the USA..."

The pathologists Prof. Dr. Arne Burkhardt and Prof. Dr. Walter Lang also declared, that they had performed more than 40 autopsies on people who had died within two weeks of COVID19 vaccination - and approximately one-third of these deaths were due to the C19 vaccine.

One minute taster (with voice over by English translator)

Six Minute clip (with voice over by English translator)

On Monday, 20th September in the pathological institute in Reutlingen, the results of the autopsies of eight people who died after COVID 19 vaccination will be presented. The fine tissue analyses were performed by pathologists Prof. Dr. Arne Burkhardt and Prof. Dr. Walter Lang.

The findings confirm Prof. Dr. Peter Schirmacher's finding that among more than 40 corpses he autopsied who had died within two weeks of COVID19 vaccination, approximately one-third of those deaths were caused by the vaccination.

Microscopic details of the tissue changes will be shown during the live-streamed press conference. Prof. Dr. Werner Bergholz will report on the current parameters of the statistical recording of vaccination events.

The press conference will also present the results of the analysis of COVID-19 vaccine samples by an Austrian research group, which are in line with the findings of scientists from Japan and the USA. Undeclared metal-containing components were found in the vaccine. Visually, vaccine elements are conspicuous by their unusual shape.

The results of the investigation have led to legal and political demands, for example, for the immediate collection of information by the authorities in order to be able to assess the health risk posed to the population by the COVID-19 vaccines. For example, early signals of impaired fertility in vaccinated individuals can be examined by consulting IVF registries. Through the cancer registry, insights can be gained into the development of cancer due to the genetic modifications of the viral RNA. Suspension of COVID-19 vaccination should be considered.

A FEW OF THE IMAGES PRESENTED AT THE CONFERENCE

What are these particles?

The above object is referred to by the doctors in the video as a potential chip.

The above 'chip' dried out and developed the above structure.

Blood test of a vaccinated persons. A fibrous foreign body

Blood of a vaccinated person with health problems after vaccination. Erythrocytes not in good condition. A granolucyte is visible.

Blood of a vaccinated person. A fibrous foreign body can be seen.

Blood of a vaccinated person. An unusual shaped foreign body can be seen.

Dried up vaccine. What are the white dots and structure?

Blood of a vaccinated person. Foreign body are visible.

A rectangular foreign body. Rectangles obviously do NOT occur in nature.

Films on Vaccine-Induced Magnetism Film 1 - 'Not On The Beeb' investigates the MAGNET CHALLENGE - True or False?

Film 6 - Zach and Gwen with a mind-bending revelation