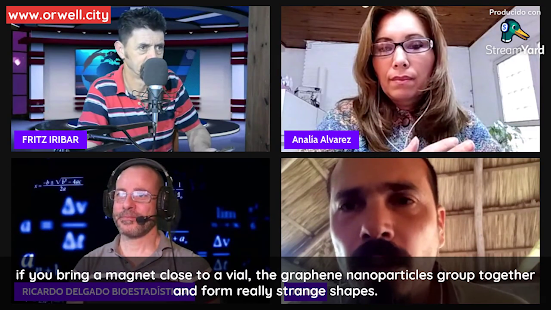 In a special program on Fritz Iribar's channel, El Punto Blanco, Dr. Martín Monteverde and La Quinta Columna explained why the material that Japan found in the vaccination vials is, indeed, graphene oxide.

There are many clues given that make it clear that there is a political crisis in the background triggered by the discovery of this nanomaterial, among them the break in the cold chain that allowed the graphene oxide nanoparticles to acquire magnetic properties at a higher temperature and group together in the vials, being evident to the naked eye.

Fritz Iribar: There's also a detail, doctor, that I have heard several times. It'd be necessary to... I'd like to try to form a debate with a doctor like the one who was on Channel 7 in Salta. I think I can get someone who can be there and try to have a little debate. Because there're a lot of things that doctors I don't know if they don't know or don't want to know.

For example, these supposed vaccines had to be, they said at the beginning, under very low refrigeration..., that is, at a very low temperature. And I don't know if they're complying with that first. Then also, in some countries, governments bought vaccines, and they had expired. The period in which they could inject them had already passed. So how do doctors not realize this? Seeing all that, they don't realize that this isn't normal. This is not about 'taking care of yourself.' There's much more behind all this. It's unfortunate because all that is there for everyone to see.

And where I live, which is a small place, I am 40 km from Córdoba Capital. It's a small place. It's a very quiet place, an almost rural place. And in the place where they used to vaccinate, they had the appropriate facilities to have a vaccine, as they said, at -20ºC or -50ºC. The transfers that they did were something very special. So, how do they not realize that they're —as they say with food— cutting the cold chain? And that doesn't guarantee the proper condition of the vials. So it's something very, very strange. Why don't the doctors realize that? Or is it that they don't want to?

Dr. Martín Monteverde: Look, first I would share with you two thoughts, and then, if you want, we talk about the role of doctors in all of this. First, this whole issue of cooling, of almost freezing the vaccine, is a strange issue that, at some point, we're going to know the truth. But it's a strange subject.

I have seen that in vaccines —when they aren't so cold or frozen—, if you bring a magnet close to a vial, the graphene nanoparticles group together and form really strange shapes. They look like scissors that form inside the little vial. And, in addition, you can see the black color because a lot of nanoparticles are grouped together. If you bring a magnet close to the vial and if it's not frozen...

Ricardo Delgado: As has happened in Japan, Martín. They have indeed found, visually, some traces of a blackish material. They were talking about magneto-metallic particles, but they were already talking about magnetism. And that was the reason why the Prime Minister of Japan resigned from office, uh. He's not going to renew his office as of September 29th.

That all comes from Dr. Campra and the analysis that was done here. We have no doubt about that. Indeed, I don't want to interrupt Dr. Martin, but we're on the same subject.

Probably, that refrigeration is so that the magnetism would not raise the alarm with the doctors when they were going to inject the substance. Because we know that with heat, graphene oxide acquires magnetic properties. Everything is coming together once again.

Fritz Iribar: Yes, well. But, then, it's known that in many cases, for example, they didn't get the desired cooling. I don't know —honestly—, I personally don't know if that might cause something different in people. Maybe it doesn't. But what I'm getting at is that a lot of protocols were broken in that, right? In everything that was said to be done. And yet the doctors kept on vaccinating and advising that you had to get vaccinated. That's my question.

Dr. Martín Monteverde: Yes, that's where I'll answer you, Fritz. First, taking advantage of the fact that the subject of Japan came up —and a little bit going back to what we said at the beginning about the world elite—, notice that 6 days ago, the government of Japan returned 1,600,000 doses to Moderna. Because the government of Japan says that they found magnetic metallic particles. It doesn't mention the word graphene, but we all know what it is. Magnetic metal particles. And notice that after 48 hours passed... And 4 days ago, the Government of Japan announces that they are withdrawing another million doses from Moderna. That is 2,600,000 in total. But in those 48 hours, the Government of Japan received phone calls from the world's elite. And now, instead of saying that they were magnetic metallic particles, the Japanese government says, 48 hours later, that it was steel. That's that. And a day later, the Prime Minister of Japan announces that he is going to resign.

So, we can see clearly how the world's elite puts pressure on governments. This gentleman, the Prime Minister of Japan, resigns from office. Maybe he'll be able to save his life. And you know that out of 7 presidents who opposed WHO's orders, 5 were assassinated. The president of Tanzania... Just when the president of Tanzania received the WHO PCR kits from the WHO staff, and the PCR machine —which is a machine—, the president of Tanzania, just because of his background... He was a chemist, and he knew a lot about biology. The Tanzanian president said to the WHO staff, 'Well, okay. Give me some swabs.' He went and swabbed a fruit, papaya. He swabbed a bird called the African kware.

He swabbed various life forms that aren't human beings, even automobile oil, too. And he took those swabs to the WHO staff and told them that he had done the swabs. And he gave the samples first and last names. Some from a 30-year-old female, some under the name of a 45-year-old male. Well, the WHO staff put the swab samples into the PCR machine, and the machine reported that they were positive.  So, the president of Tanzania said, 'This is very weird.'

And he told the WHO people to please leave the country and take the PCR kits with them. And, furthermore, he made it public. He shot a video that went viral all over the world. This was last year. This was 3 months into the pandemic. Or 2 months. Well, the president of Tanzania died strangely. We still don't quite know how he died.

Fritz Iribar: And it wasn't Walt Disney, was it?

Dr. Martín Monteverde: No. Two more presidents from Africa, from countries in Africa, who didn't want to comply with WHO orders, also died.

The president of Haiti was killed a month ago because he didn't want to vaccinate the people of Haiti.

The president of Madagascar said publicly about 20 days ago that WHO had offered him 70 million dollars to vaccinate the population of Madagascar. He said it publicly. They made an attack on him, they almost killed him 10 days ago.

And the president of Belarus, who also didn't want to comply with all the WHO orders, was attacked. He was almost killed.