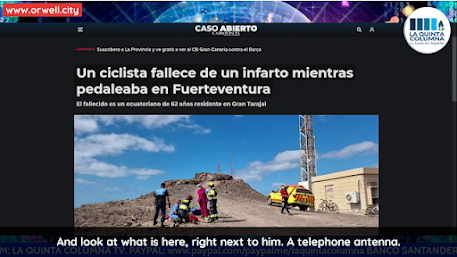 Several heart attacks and circulatory system affections have been reported in different parts of the world as if it were an epidemic.

The reason behind this 'phenomenon,' if it can be called that, is the interaction between graphene oxide and the electromagnetic fields to which the inoculates, mainly, are exposed.

La Quinta Columna highlighted a few hours ago the case of a recreational cyclist who died from a heart attack while training in a place surrounded by telephone antennas.

Orwell City then brings into English the explanations of biostatistician and researcher Ricardo Delgado.

Ricardo Delgado: ﻿Let's see this other news. It's related to the previous one.

A cyclist dies of a heart attack while pedaling —poor guy— in Fuerteventura.

The deceased is a 62-years-old Ecuadorian man, resident in Gran Tarajal. You can see what's in Gran Tarajal. Look where he has fallen. In this photo, we can see how a fireman is performing CPR (cardiopulmonary resuscitation).

And look at what is here, right next to it. A telephone antenna. In fact, lies in an area of repeaters with a high concentration of electromagnetic fields. We're betting whatever you want that this person has been graphenated/vaccinated. And this is what's happening here. It's very, very clear.

A cyclist died of a heart attack —a heart attack— while cycling in Gran Tarajal, on the island of Fuerteventura.

It's a hill, just like the other part you see there, with that road. Well, that's where these antennas are usually installed. And graphenated people... What's inside the vaccine (graphene oxide) is excited. It has an affinity, as I say, for the cardiovascular system. Especially when there is cardiac activity. The heart generates an important electric field, which becomes more important when it becomes active. An electromagnetic field has an affinity for graphene. The person is irradiated and falls fulminate of a heart attack. That's why we have an epidemic of heart attacks. Apart from thrombi, ictus, ischemia, embolism, hemorrhage, etc.

Well, I'm going to share this news on the channel even though you can't continue reading it.

It's very illustrative because you can see that the person has the Trojan horse in his body. The graphenated person is on the ground and, a few meters away, you see the little antenna.

And you may say, 'Hey, but are these people in the picture vaccinated too?' Probably. But they don't suffer that much. Maybe, they have been able to degrade the toxicant. Maybe, this deceased person has recently been vaccinated and has it in a higher proportion. Or the others aren't making the effort that this person was making. Because these antennas, perhaps, aren't emitting the base frequency that excites graphene oxide, but they're emitting certain frequency harmonics that can do this. OK? As I say, I'm sharing this news. It's very illustrative because you see, precisely, the crime weapon. It's the photo itself. I'm removing this news and, now, I'll show you the next one, which is the same, but it makes clear... Here, I think it's this one.

A 62-year-old cyclist dies in Gran Tarajal after suffering a heart attack.

This happened yesterday, September 18. Here, they have been smarter. They have taken the photo where you can see the Civil Guard ambulance services, but not the antennas. However, they mention them here: A 62-year-old man has died of a heart attack at the height of the cell phone repeaters of Gran Tarajal in Fuerteventura. Apparently, while circulating through the town on a bicycle, according to security and emergency sources have reported.

I'm sharing this news as well. Let's see if the emergency services, the Civil Guard, do more than just arresting people who go without muzzles and so on and realize what's really happening. Let's see if they realize once they arrive to resuscitate people who fall. They should just look up a little bit and see what those antennas are pissing on them. Of course, who would believe this?

The sources cited above have been able to ascertain that the man was an recreational cyclist. A trained person. And that, therefore, an excess of effort could have been the cause of the heart failure.

Take a look. Here, you can see the repeaters from far away.

An effort. An excess of effort. Listen, if you exert yourself too much, the body stops because it's tired, and that's all. In that case, you faint so that you stop automatically. But you don't have a heart attack. This is abnormal.

The attention given by the emergency services hasn't been able, in any case, to save the victim's life. As if he was being chased —well, indeed by the reaper— by a bear, and had to pedal to the point that he lost his life.

What a tragedy. Oh, my God of my soul... The things we have to go through!