Spain: What results are obtained when "dies on the street" is put into a search engine? 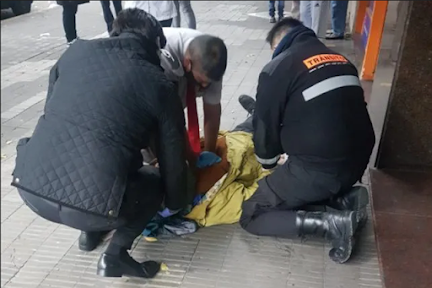 Yesterday we published a news item about an event that had taken place in the San Bernardo neighbourhood of Salamanca, in which a 74 year old woman had collapsed and died in the middle of the street. When we tried to find more information about this death, we did a Google search and found that in April 2020 and April 2021 there had been two similar events in the same neighbourhood in the capital of Salamanca.

And then, out of curiosity, we carried out another much simpler search with the words “death in the street”. We had never done a similar search before, but the results we found were quite worrying. Do you remember when, at the beginning of the pandemic, we found videos of deaths in the street in Wuhan and Guayaquil? Well, take a look at the news we came across when we did that search:

A 92-year-old man dies in the street. The events took place in Béjar and everything points to the death being the result of a heart attack. La Gaceta de Salamanca’ (13/09/2021).

A man dies in the middle of the street in Llanes. According to witnesses, he was an octogenarian who collapsed when he went to get his car and could not be revived. El Comercio’ (08/05/2021).

A woman dies in the middle of the street in Valladolid. The emergency services tried unsuccessfully to revive the elderly woman. El Norte de Castilla’ (16/04/2021).

A woman dies in the middle of the street after suffering a heart attack. The incident occurred in Calle Teniente Coronel Fernando de Castro and everything suggests that she died of natural causes. El Norte de Castilla’ (27/02/2021).

A woman dies in the middle of the street in Schultz Avenue. The woman collapsed on the pavement and died suddenly. La Nueva España’ (26/04/2021).

A man dies in Oriente street in Anguiano after suffering a heart attack. A local resident alerted SOS Rioja when he found him in the street. La Rioja’ (08/09/2021).

A woman dies in Bernabé Soriano street in the capital. The incident took place at around nine o’clock in the morning in this central street in Jaén. SER’ (28/07/2021).

A man dies after collapsing in the street in Salvaterra do Miño. After receiving the alert from the Guardia Civil, the medical staff could only confirm the death, which everything seems to indicate that it was caused by natural causes. Faro de Vigo’ (03/04/2021).

Man dies after collapsing on the ground in Recaredo Street. The emergency services tried to revive the 66-year-old man. El Correo de Andalucía’ (24/08/2021).

A person dies in the middle of the street in the capital of Gran Canaria. It was a result of cardiorespiratory arrest, report the local police. Canarias 7′ (23/04/2021).

These are the results that appear in only the first three Google search pages. There are many more similar items from this same year.

Every year, some 50,000 people in Spain die of heart attacks, and surely some of these take place in the street.  During the alleged Covid-19 "pandemic", this figure is said to have risen by 50%, although this was attributed to people no longer visiting hospitals or receiving early care. An alternative hypothesis to consider, however, is that of La Quinta Columna, who describe an inevitablly intimate relationship between graphene oxide (thought to be present on all of the principal Covid vaccines) electromagnetic fields and heart attacks. Ricardo Delgado has noted that the early footage of people abruptly keeling over in the street in Wuhan, late 2019, do not conform with any known pattern of a supposedly "viral" disease. And while such footage should be viewed with caution (the Chinese government, untypically, did nothing to stem these images from reaching a global audience), this potentially new method of inducing sudden and fatal heart attacks (through nanotube signal augmentation) should not be discounted. The month of the vaccine rollout saw a massive surge in excess deaths in Spain, mirroring similar surges all around the world on the heels of the initial Covid vaccination campaigns. The eventual toll will be easily measurable by the end of 2021, when the health of a heavily injected population may be compared with a pre-Covid vaccine population in 2020.