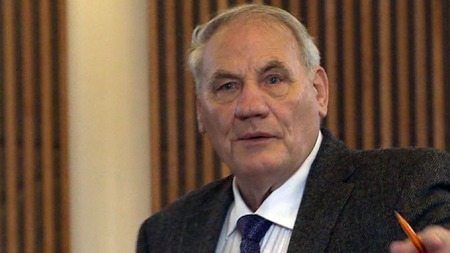 Today, in our series Luces en la penumbra (Light in the Dark), we publish an article by our colleague José Delta entitled "The twin utopia of Doctor Hamer." Ryke Geerd Hamer was a German doctor specialising in internal medicine and radiology. He also studied theology and physics studies, combining his academic and scientific activity with his medical practice as head of various services in different German hospitals. A victim of the witch hunts perpetrated by the hegemonic science of his time, his Biological Laws today present one of the main axes of scientific challenge against the dogmas of the pharmaceutical empire that has us in its grip with the worldwide Operation Covid-19.

It is said that two of the main characteristics that differentiate human beings from other living beings are abstract thinking and imagination, both having contributed to their evolutionary lift-off. In addition, these abilities have enabled humans throughout history to realise most of their dreams. With these assumptions, one might wonder why we have not managed to translate into reality that utopian happy world to which we supposedly aspire, but seem, on the contrary, more directed toward the one that Aldous Huxley captured in his famous novel. The answer to this is quite intuitive. The truth is that the only limitation (a not insignificant one) that distances human beings from their goals are their own idiosyncrasies or, if we prefer, their own rhythm of consciential evolution.

Back in the 1970s, Dr. Ryke Geerd Hamer made the greatest discovery in medicine to date. He observed that so-called "diseases" serve a larger purpose, since they are in fact the implementation of a special program of nature that makes complete biological sense and possess a survival function. These programmes originate from serious, unexpected, acute, dramatic biological shocks that are experienced in solitude and occur simultaneously on three levels: the psyche, the brain and its corresponding organ. For almost forty years, Hamer investigated these findings, in the results of thousands of medical records, and was fascinated to observe that he was looking at a biological system inherent to all species.The most surprising thing about his theories, and what makes it a true paradigm, is that at that time he managed to create an authentic, meticulously detailed topographic map in which he described exactly how each process develops according to the biological conflict experienced. That is, a process is played out one hundred percent of the time, in contradistinction to what happens in conventional or allopathic medicine, which is based on uncertain and easily falsifiable hypotheses. Hamer called this paradigm the New German Medicine (NMG), a nomenclature that was recently replaced by the “German Healing Science”, and from it he extracted five invariable and perfectly verifiable laws. In his own words, “the New Germanic Medicine is not an alternative, integrative or complementary medicine, but rather offers a complete scientific system, based on Five Biological Laws that explain the cause, development and above all the natural cure of the inaptly named diseases". Over many years, Dr. Hamer, a specialist in internal medicine and radiology (who also studied theology)  combined his medical activity as head of various services in several hospitals in Germany with the dissemination of his findings, offering himself in various countries to give lectures and to hold marathon clinical sessions with patients without obtaining any remuneration. He systematically documented all cases, collecting brain scans and histological results, regrouping, and verifying the certainty of his discoveries. Without a doubt he was a true philanthropist, a genius ahead of his time, and his character can be seen reflected in these couple of quotes from him:

“The doctors of the future, the doctors of the New medicine have to be wise and practical people, with healthy good sense and warm heart and hands. They must be physician-priests as in times past who were benevolent and incorruptible, resembling the "good" old family doctors.”

“In New Medicine, the patient is the absolute head of the process that affects the body itself. Only he can know what is really good and right for him, only he can be responsible for himself. We do not “heal” the patient, but the patients heals by himself. The patient—doctor relationship has to be completely redefined and rethought. The patient has to work out the therapy that is best for him with the help of people who are physicians of the body and soul and genuinely care for their patients.”

It goes without saying that such a discovery directly undermined the economic interests and the status quo of both the pharmaceutical industry and the scientific community, medical colleges, different health-related organizations, etc. from the very outset. Therefore, it is not surprising that almost forty years after its discovery, the NMG is still a true unknown, having no dissemination through the mainstream media, despite the fact that Hamer's work is so highly detailed and meticulous that it could easily be subjected to verification. And despite the fact that Hamer himself repeatedly requested the verification of his thesis by different universities, he was never granted the possibility of defending it. On the contrary, his license to practice medicine was withdrawn for “malpractice”. He was persecuted, sentenced to prison for divulging his knowledge and finally exiled to Norway, where he died a couple of years ago without ever seeing the deserved recognition of humanity for the surprising and relevant discoveries that he dedicated his life to.

And at this point we must return to our opening statement, where we mentioned that the greatest limitation that separates human beings from their utopian objectives are their own idiosyncrasies, since their legitimate objective of survival pushes them to selfishness, envy, and a lack of recognition of their own being, clouded by the mist of their fears. Indeed in its dense level of consciousness, humanity beheaded its own utopia of living in a less sick society, betraying, selling and postponing said situation to obtain in exchange some sad material currencies reflected in economic resources, power quotas, favorable treatment, greater social status, etc.

Fortunately, more and more therapists and physicians are including NMG in their regular practice. Despite risking their professional careers and social status to do so, they are encouraged by the success of their patients' healing. In fact, it is not difficult to understand why Nicaragua, a country with a precarious economic situation and therefore, far from the crosshairs of the multinational pharmaceutical companies, has been the first country to implement the NMG within the health care system's portfolio of services.

What was Dr. Hamer's twin utopia?

1.- To imagine that the scientific community would recognise his work and research in the field of health. Although Hamer died a couple of years ago and his dream was not fulfilled, we cannot rule out that in a utopian future, where materialism does not dominate our scale of values, a deserved recognition in the field of medicine will be posthumously granted.

2.- To imagine that his discoveries would massively revolutionise the way of understanding and dealing with health and disease. That it would revolutionise a society with our level of consciousness, that is so drug-dependent on the media, on our politicians, our official institutions, our modus vivendi and, ultimately, on the external magic pill represented by anything that improves our existence without any effort or direct intervention on our part. At present, this paradigm is gaining more followers every day, although in a timid fashion. In our utopian thought, there is at least the possibility of dreaming of a sufficiently conscious society that can manage its own health with the respect and efficiency that such a heritage deserves. And we can do it with the knowledge that our optimal health depends exclusively on us, on our way of managing our experiences through our belief system and, ultimately, on our ability to lovingly interpret the events of our life paths.

Finally, it would be worth pondering and taking into account that for centuries, our intellectual and conscious evolution has undergone a geometric progression that is out of step with our slow biological development (which has barely changed in the same period of time). How will we manage to combine that ancestral, intrinsic, survival programme that Hamer spoke about with a stage of consciousness development and transformation in which the main imperative of survival-at-all-costs gives way to the timeless purpose of conscious evolution, as we experience life in a more loving and empathetic environment? Will that program that is so deeply ingrained in us have to undergo exponential growth in order to adapt and keep pace with our new condition? Or will we already be at that stage of biological transformation?

Are we aware and capable of perceiving, both psychically and physically, the changes that are already taking place in our bodies? 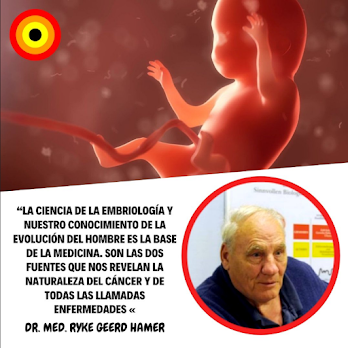