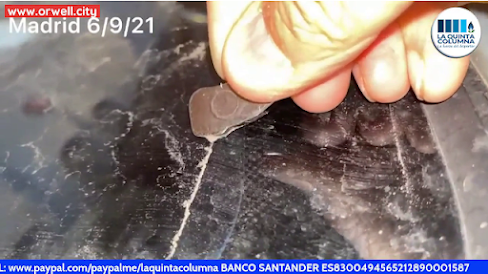 With all that's being seen around graphene oxide and the magnetism involved with it, people's curiosity is increasing every day, leading them to do the magnet test with more elements beyond arms, food, and medicines. Now, new videos are going viral.

These videos provide evidence that the dust that settles after rainfall, or after chemtrail spraying, is magnetic as well.

This discovery is particularly important, as it would be giving more basis to the theory about graphene oxide suspended in the environment to multiply the electromagnetic waves emitted by 4G, 4G Plus, and 5G antennas, taking them to the ionizing range.

La Quinta Columna has already coordinated with people ready to analyse samples of this magnetic dust to confirm the presence of graphene oxide in it.

Ricardo Delgado: Let's see now two videos of the metallic rain, José Luis. Another two new ones have been sent to us. And we're going to do our best so that some of these people can send us these traces of magnetic dust so that it can be analyzed.

We've already talked to the person who can do it. And he says that it's especially easy to apply decantation techniques so that this material can be easily seen under the microscope or through some spectroscopy techniques to identify it clearly. And, surely, we'll find graphene. Because, in addition, we have seen today some images under the optical microscope that a follower of La Quinta Columna has captured. And it looks pretty close to the real thing, doesn't it?

Dr. José Luis Sevillano: It looks like it. I thought I saw something that I think I can't say no.

Ricardo Delgado: One of the videos is this one here.

Dr. José Luis Sevillano: We're in a park in a little town in Ciudad Real and, recently, I made a video about a storm. It was raining. And on the windshield glass, there were magnetic particles. Now what I want to do is a test here, on ordinary soil. It's totally ordinary soil. We're going to accumulate a little bit of soil and we're going to pass this magnet over it.

As you can see, this magnet is completely and practically clean. And here's the pile of soil. So, I'm going to pass it over here. I could do this with this pile just like I could do it with any other pile. And look how many particles there are. Even rocks. If I leave them, here, for example. I'll leave it here. And they're just very dark gray or black. But all of this is magnetic. All of it. Look at the attraction of the magnet.

Ricardo Delgado: This is shocking!

Man: Mind-blowing, huh? And yet I tried to stick this here... This is iron. And it falls off. Here I have the magnet with all the particles, and the magnet does stick. It's quite curious.

This is what falls when it rains and it's in the ground. And if it's soil, why do we have so many magnetic particles here? Are we just discovering it now after so much history? Or what is going on? It's mind-blowing. Well, this is it.

It's a park, and it's supposed it rained. We imagine that the stone can be an agglomerate that has been made over time. An agglomerate has been formed with these particles. And, then, we have this other video, too. This one, specifically, is of a car windshield.

Ricardo Delgado: Well, this is the same man who is doing the studies on when these little planes go by spraying. And then we find this metallic or magnetic dust. Or magnetic in the...

Do you understand? This is normalizing the crimes so that you don't find out about their plans. So that they can commit them to you and you don't resist. 'It's normal. You go there, and they'll slit your throat a little, that's all. If you lose two or three liters of blood and die, it's okay.' They're normalizing everything they're doing to you so that you don't resist, obviously. This is very normal, right?

Ricardo Delgado: José Luis, if it's 'raining' that dust, there must be finer particles that we're breathing. And if there's graphene, we already have the great Trojan horse inside.

Dr. José Luis Sevillano: That's why I'm really looking forward to analyzing that dust. Because if there's graphene in that dust, we already have the answer to all those people who have been telling us for a long time that they haven't been vaccinated, and yet they're magnetized. We would already have their answer.

What we do know is that this magnetization would be produced via the respiratory tract. Via paranasal sinuses and, above all, the upper tract. But we would already know with certainty why these people are magnetized: because they breathe graphene powder and, as soon as it enters, it starts generating this type of biomagnetism phenomena.