Why we're facing a chemical agent and not a biological one 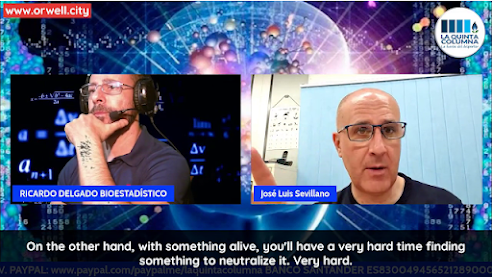 In the following excerpt that Orwell City has translated into English, Dr. Sevillano explains what La Quinta Columna has discovered so far, especially for those who are new to the subject.

Dr. Sevillano: And you see that they have long been looking for ways to counteract the damage caused by this (graphene). But the molecules that will be good for us, in general, are all reducing. You will see how somehow, one way or another, we're going to find reducing power in them.

It's just that it's a chemical thing, not a biological thing. It isn't. Biological agents become designers of molecules and go crazy.

These people have a huge problem, right now, with bacterial resistance because they don't know what to do to keep bacteria from mutating and escaping antibiotics. Because it's alive. And life depends on many things.

There are many factors, above all, because life is stubborn, and it clings to life. So if you try to get rid of it, it changes, mutates, and escapes your methods. So when it comes to something living, there's no way to get it. Now you attack the DNA, the surface protein, the ribosomes, whatever. And, in the end, it gets away from you. But not when it's a chemical agent. Because chemical agents aren't alive, strictly speaking. It's not alive. That has no adaptive capacity. It's a molecule with its respective properties, and that's all. But it's not alive. It cannot adapt to the environment like a living agent.

That's why when you detect something that kills you chemically, you look for the antidote, and you've got it. On the other hand, with something alive, you'll have a very hard time finding something to neutralize it. Very hard.

And we're lucky to know that this isn't a live agent. They could have done this to us with a live agent, but live agents get out of control.

The really bad ones have to be locked in a very hidden place so you can't touch them. Smallpox, weird stuff out there that can make you get, for example, anthrax if you touch them. Because once you put it in circulation, you might go to hell too.

Then, they don't use live agents. They don't even use them in wars. You know, we've already had two world wars, and they didn't use them. And they knew about them. But they don't use them because it's better to drop a bomb than to have your troops as dead as the enemy's troops in less than a week or a month.

That's why they have never used live agents. Because they can't control them. Would they use them now? Certainly not.

If they want to take someone out, it has to be with something they modulate. Antennas and chemical agents. Damn, it's that simple. And the moment you see that they are injecting you with a radio-modulable chemical agent...

Shit, what else do you need? It's crystal clear that what they want is to wipe out a certain part of the population. Certain countries, certain places, and not others. Man, please! Can it be any more evident? C'mon!

And then, in the string of lies that we have to hear every day: 'No, it's that it has mutated.' 'No, it's that I don't know what.' 'No, it's that now it's the variant.' They don't stop lying so that their version is credible. They don't stop lying. But they lie in such a way that it's already too obvious that they're lying. But they don't care because they have been doing it for a long time. Haven't they made you swallow that we vote for political parties and so on and so forth? They have been lying like that for 40 years. And everybody believes that we're represented by those parties. And they'll just lie and lie and lie, and you'll believe all those lies. Why? Because they tell you. And you end up saying: 'Well, it must be true,' even though you know, in your inner self, that it's a lie. 'But well, since everybody accepts it, it's true.' This is the same thing. Everyone realizes that this doesn't look like a virus. But since it's on TV, accept it as a virus. Thank goodness we have this vaccine thing that has proven that these people are coming for us.

And I said well: scientifically proven. If not, you'd have been taken for a half-crazed conspiratorial asshole every time you have confronted your foolish brother-in-law, neighbor, friend, or the guy from your job that wants you to take the vaccine. But with this, they're the fools who will be seen as idiots, assholes, and conspiracy nuts. Because you have a report and they have nothing. They only have the words from TV. Imagine the credibility of what the TV says in the scientific world.

Ricardo Delgado: Well, I think that today's program has been very informative. We had a good audience, José Luis.

Dr. Sevillano: Of course. Thanks to yesterday's intervention on the radio that has made people look up with curiosity to what we're talking about here.

Dr. Sevillano: Well, get this straight: people are being massively intoxicated with an agent that is radio-modulable. Just look at what has happened in the last year.

This means that what they did to our dear old people a year and a bit ago, they will reproduce it whenever and wherever they want. You heard Payeras, right? Wherever they want. 'The chicken in the oven.' They already have it. They'll press the button. That's what we say in La Quinta Columna. The rest, if you want it, you look it up. And if you don't, it doesn't matter.

What you have to keep in mind is the idea that we're being injected with something toxic that can be modulated from outside with waves. And that they can generate waves whenever they feel like it. And that if we don't put the brakes on it, even if it seems crazy what we're saying, they're not going to stop on their own. They're going to take all this to the end.

They have five, ten years to do it. Then, without any hurry. One wave, another wave, and another wave, a variant, and another... And, little by little, people are dying. Until, in the end... And dying of natural causes, eh? They'll say that everything is something like coronavirus, like a heart attack. They don't care. Because that product in your body, depending on the waves around you, either causes thrombi or a classic COVID picture. And you'll never know whether it was viral or not. Or if it was a random thing.

Then, we all have the huge responsibility to put a stop to it at street, family, neighborhood, town hall levels. You don't have to go any further. We cannot count on people in high positions because they have already left us to the dogs. They have abandoned us. It's up to us to defend ourselves at our level. And put an end to all this at our level.