A summary of the article ‘Toxicity of graphene-family nanoparticles: a general review of the origins and mechanisms’ 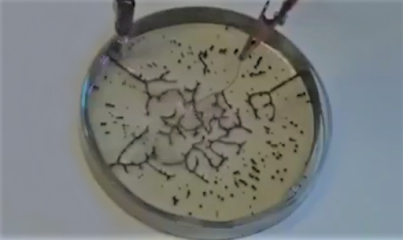 Graphene was discovered in 2004. Isolated from graphite crystals, it is made up of at sheets, each an atom thick. Graphene oxide is one of several derivatives of graphene and its unique properties have so far seen it used in a variety of fields, including biomedical applications such as drug delivery.

Data on its toxicity are based on a limited mix of animal and in vitro studies, where various derivatives of graphene have been administered in different ways. This is important to note as the type of graphene and the way it enters the body – e.g. through inhalation or via subcutaneous injection – affects where it ends up in the body and its degree of toxicity. More research is needed to understand the impact of graphene oxide administered subcutaneously, as with the Covid-19 mRNA vaccines.

The extent of its toxicity depends on its characteristics, from the size of the material, to its concentration, surface structure and charge.

* Dosage: higher concentra ons of GO tend to cause more damage: in one study, a high dose caused chronic toxicity, with GO deposits found in the lungs, liver, spleen and kidneys.

* Size: where graphene nanoparticles end up in the body and the impact they have depends on their size. More research on this is needed.

* Surface structure: GFNs in general can disrupt the function and structure of cell membranes and proteins. GO can insert between the base pairs of double-stranded DNA and disturb the flow of genetic information.

* Charge: the surface charge of GO can cause it to be taken in by cells. It can reportedly alter cell structure and cause extensive destruc on of red blood cells.

* Surface modi"ca on: studies confirm that altering the surface of GFNs using substances such as PEG (a process called functionalisation) largely decreases toxicity. However, given its high poten al to be taken in by cells, further studies are needed to assess the possible long-term effects.

* Protein corona effect: graphene’s high free surface charge can cause it to form ‘coronas’ with proteins in the body. Several papers report that GO forms such coronas and these may regulate the adhesion of GO to certain cells and even mitigate its toxicity to cells.

What does it do to the body?

Again, studies here are lacking but here is what data have shown so far:

Their small size means graphene nanomaterials – including graphene oxide (GO) – can penetrate the body’s existing protective barriers and infltrate the brain, placenta and potentially the testes. In terms of the placenta, some studies have found that the placenta does not prevent nanoparticles from transferring to foetuses; this has a significant impact on foetal development.

GO can cause acute inflammation and injury to vital organs. In the lungs, it was found to cause inamma on, pulmonary oedema and the formation of granulomas. There has been very little research into the toxicity of GFNs to other organs such as the liver, spleen and kidneys.

Graphene nanomaterials are increasingly used in neurosurgery, and studies have mainly focused on its applica ons rather than its toxicity. However, studies do show that these materials can decrease the level of ribonucleic acid and its rate of synthesis, which harms brain tissue development. More studies on its toxicity are underway.

Animal studies show that GO and reduced GO (rGO) damage embryos. One study on mice found that all pregnant females injected with rGO had abortions, regardless of dose. Most of the mice given a high dose died, and their offspring suffered delayed development.

It is impossible to prevent GO from entering the blood. Its impact on the blood depends on its coating, size and dosage but it has been found to damage red blood cells and T lymphocytes.

Graphene nanomaterials in general alter the viability, shape, size and structure of cells. GO specifically decreases cell adhesion, which can disrupt important processes and lead to disease. It also causes apoptosis – a form of programmed cell death – and enters into the lysosomes, mitochondria, nucleus and endoplasm of cells. GO derivatives dramatically decrease the expression of differential genes that are responsible for the structure and function of the cell membrane.

GO’s interaction with cells causes extensive oxidative stress which can trigger the generation of cancer cells, cause cells to mutate, and accelerates ageing. GO-induced oxidative stress has been implicated in acute lung damage, cell death and DNA damage.

Mitochondria are the vital energy centres within cells. Studies have found that exposure to GO can both reduce the number of mitochondria in particular cells, and impair mitochondrial activity in such a way that it generates oxidative stress and causes cell death.

GO’s small size, high surface area and surface charge could poten ally cause severe DNA damage. Even if GO is unable to enter a cell’s nucleus, it can still interact with DNA at the point in the cell’s cycle when the nuclear membrane breaks down (mitosis). This increases the potential for DNA aberrations. Interaction between graphene and the DNA base pairs can severely deform the end base pairs of DNA. GO may also cause mutations that could lead to the development of cancer – and if those mutations happen in reproductive cells, they could impact fertility and threaten the health of the next generation.

GFNs (including GO) can cause significant inflammatory responses and tissue injury. GO has been found to trigger apoptosis and autophagy – both forms of programmed cell death – as well as necrosis, a form of cell death that occurs as a result of infection or injury.

Data suggests that GFNs including GO could modulate epigenetic changes that cause subtle changes in gene expression programming. However, this is not fully understood.

A lack of data

There simply isn’t sufficient data with which to fully understand the toxicity of GFNs to the body. Recent studies have focused on short-term impact but little is known about long-term effects. For example, while functionalised graphene does seem to have lower toxicity, what happens if the surface coatings that lower the toxicity break down over me? Also, it is unknown as to whether GFNs could induce foreign body sarcomas, so more studies on this are urgently needed. 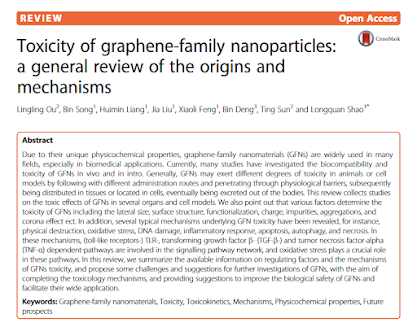