The WHO suspends India's Covaxin shot 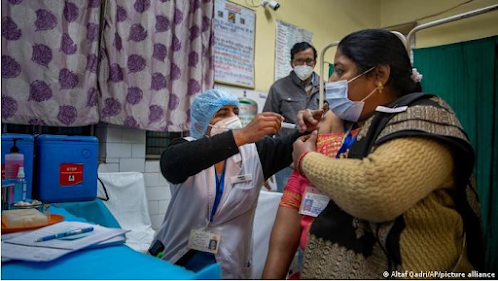 The WHO did not reveal the nature of the problems encountered at the factory, located in Hyderabad, Telangana state. But she said Bharat Biotech has agreed to cease Covaxin exports and is “developing a corrective and preventive action plan.”
Lalaina Andriamparany
11 avril 2022

On Saturday April 2, the World Health Organization (WHO) confirmed the suspension of the Covaxin vaccine from Indian giant Bharat Biotech. The WHO mentioned safety issues in the manufacturing process after inspectioning manufacturing plants. The organisation recommended that countries that had received the vaccine take "appropriate" measures.

In November 2021, the World Health Organization (WHO) granted emergency use authorisation under the EUL protocol for COVAXIN. It is added to the list of vaccines validated by the WHO to prevent the disease COVID-19 [a poorly-defined condition allegedly caused by a never-isolated virus]. The WHO EUL protocol is used to assess the quality, safety and efficacy of vaccines against COVID-19.

Following the inspections between 14th and 22nd of March, the WHO issued a press release claiming to have detected problems within the production facilities of the firm Bharat Biotech, a company producing Covaxin in India, located in Hyderabad.

The WHO spokesperson said that “the data available to WHO indicates that the vaccine is effective and that there are no safety concerns”. Nevertheless, WHO advises countries not to use leftover doses of Covaxin.

The WHO has now suspended the supply of the Covaxin vaccine by UN agencies, such as UNICEF through its COVAX initiative. In the same vein, the countries which have obtained an authorisation for Covaxin are invited to turn to other alternatives.

For many low- and middle-income countries, Covaxin was an easy vaccine to implement because, unlike messenger RNA vaccines, it does not require storage at very low temperatures.

The WHO did not disclose the nature of the problems encountered at the plant, but it shouold be pointed out that Bharat Biotech has accepted the cessation of exports and is currently in the process of developing "a corrective and preventive action plan."

But according to Indian news agency, The Indian Express, the facilities used by Bharat Biotech to manufacture Covaxin are not specifically designed for a Covid-19 vaccine.

The Indian Express revealed that following the emergency use authorisation from India's regulatory authority, Bharat Biotech repurposed its existing facilities, some of which were used to produce polio virus vaccines, others for rabies vaccines, and still others for a vaccine against Japanese encephalitis.

Also according to the newspaper, the WHO had asked the company to modernise its facilities specifically for the manufacture of a Covid-19 vaccine, in this case Covaxin.

Like the Valneva vaccine, Covaxin is composed of inactivated particles of the SARS-COV-2 virus [the entity that exists only in silico, that is, by a simulated, computer-generated genome]. In January 2021, India's drug regulator, the Central Drugs Standard Control Organization (CDSCO) had granted emergency clearance for Covaxin, even though Bharat Biotech had yet to provide any estimate of the shot's effectiveness following its phase 3 trial. Faced with this, scientists have pointed the finger at the laxity of the Indian government.

It is worth remembering that in March of 2021, the Brazilian Health Regulatory Agency (ANVISA) said it found several violations of good manufacturing practices (GMP) in the company's factory. GMP is an umbrella term for the steps manufacturers must take to ensure safety, efficacy and quality.

According to ANVISA, Bharat Biotech had not validated its method of inactivating SARS-CoV-2, which suggested that the vaccine would contain a live virus, and could not guarantee either sterility or efficacy.

This led Brazil to suspend a project to import 20 million doses of Covaxin.

Faced with the decision of the WHO, the CDSCO has not yet made a decision. According to experts, this silence suggests that the organisation will not take into account the quality standards imposed by the WHO [WHO's "safety standards" that have done nothing to halt the imposition of the most lethal medical intervention in world history].

A Bharat Biotech spokesperson has already said the firm will continue to sell their vaccine in India, which remains their biggest market, where around 309 million doses of the vaccine have already been administered.

Parents in India Mourn the Death of Their Children After COVID-19 Vaccines: