'France Unbowed' bows its head to the bankers 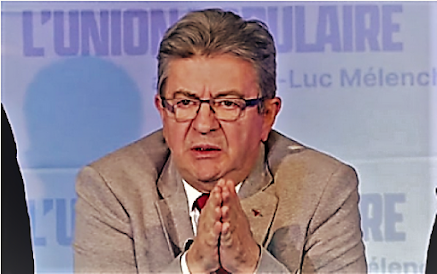 The France Insoumise party has woken up with a hangover worthy of the morning after a New Year's Eve celebration together with a drinking contest in the company of Renaud and Depardieu. It is April 11th, 2022 and the boss of the Insoumis has called on his flock to submit to Emmanuel Macron. France Unbowed, the movement created by Jean-Luc Mélenchon, has bowed to deep state power.

The shock is terrible. Twitter is in turmoil and voters cannot believe what they're hearing. Jean-Luc Mélenchon has called - three times - "not to give a single vote to Marine Le Pen", which is equivalent – ​​three times – to giving them to the current President Macron. The discomfort is palpable, after having repeated loudly, repeatedly, far and wide: “Anybody but Macron! » the leader has turned coat just before taking a comfortable retirement. Deal with it! The online electorate of the Insoumis is annoyed. They would have preferred to hear a voting instruction that leaves everyone with the choice to do as they see fit, but above all not to give the victory to the man who wants retirement at 65, who has crushed the Yellow Vests, fired healthworkers, closed hospital beds, pissed off the French, and schemed with Benalla, McKinsey and Alstom…

What about the West Indians who voted en masse for Mélenchon? They won't forget the gendarmes who took over the Martinique hospital to forcibly extract nurses, doctors and non-vaccinated healthworkers. All that for this ? Vote Macron or abstain to let him win? This is the choice of Didier Maïsto, the man who calls himself "rebellious by nature, committed by conscience". After having campaigned for Mélenchon, he doesn't give voting instructions but trumpets all the same that he will deliver a blank vote… and therefore a vote for Macron.

The cases of champagne are chilled on the side of Macron, but the story is not over yet. A good part of the mélenchonistes will vote for Marine, the others will abstain, and the contest will be closely played out. We can count on the media to pull out of the hat reports on Marine Le Pen and her father, with documentaries on the Third Reich on display until April 24th and the CRIF (Representative Council of French Jewish Institutions) which will shout: "Never again!"… except for the Azov battalion of course!

Will a French surge come and put an end to deep state power or will they choose vaccination every three months? In any case, the respect between Mélenchon – who spent thirty years in the Parti socialiste before realising that it was shit – and Macron is total. With respect to Jean-Luc Mélenchon, Macron expressed himself plainly in 2018: "He is not my enemy".

French rage at the lying press: