To remove Macron: forget about your "credibility", it is useless! 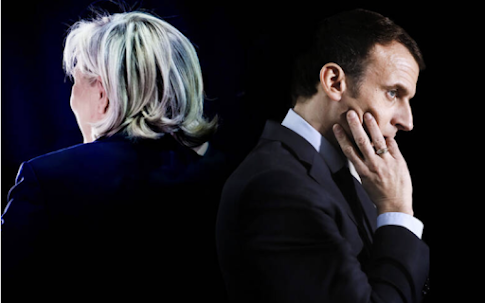 Many French people dream of freeing themselves from Macron. But there is a catch: terror surrounds them. "What? You would vote for Le Pen? No, don't do it... you're going to lose all credibility..." I'm going to explain to you why credibility, like an appendix, is absolutely useless, and that you can recover a normal and happy life as soon as you abandon it.

Two-thirds of French people want a change of the President of the Republic according to a poll published a few days before the first electoral round. This figure is quite consistent with the results of the election, which showed that Macron did not reach one third of the votes cast (with one quarter of the French abstaining…).

Will this desire for change translate into the ballot box?

Many would love to vote for Marine Le Pen, but the weight of censorship, shame, and collective vindictiveness ramped upl by the media and powerful caste influencers promises heavy punishment for anyone who gives in to their urge to remove the current hated President.

The caste is organising its resistance against these people.

Disrepute and cancellation: the two flanks of terror

To “hold the line”, the caste uses its favorite modus operandi, now deployed on all occasions to replace democracy with a regime of enforced consent. For all those who refuse the globalist order, the sanctions of disrepute and cancellation are pronounced with full force and ring in the average mind flike the summons of the Grand Inquisitor once did.

What must be understood is the combined power of this double whammy. If you want to continue to be "credible", that is to say worthy of being listened to at the adult table, you have to declare your faith in the Republic, in democracy, in humanism, all values now hackneyed by those who claim to defend them, and which serve as a convenient way of prohibiting people from voting for the National Rally.

Cancellation occurs when, in spite of the threats, you committ an act unapproved of. So, you are canceled from dinners in town, you lose your customers, your orders, and even your simple “hello” in the street. And it's not even that you're cannot be heard. It's simply that no one pays attention to anymore.

If there were a salt mine in Siberia to send you to, they would not hesitate.

You voted for Le Pen and you have become untouchable.

Or so you thought.

Because it happens that this system now has a major flaw. It has become so trivialised that it has less and less impact on reality. The caste has put itself in the progressive corner of its hatred of the other and freedom of thought.

By dint of intolerance, the caste has transformed democracy into a property-based, aristocratic regime, reserved for an increasingly small fraction of the population.

The trivialisation of disrepute and cancellation began with the Yellow Vests. The slightest inclination, even very discreet, for these angry devils was worth contemptuous looks and often cost a heavy dose of distrust.

It continued with the ban on Covid treatments and the virtual mandate to get vaccinated. From there, we went from blacklisting the "fachosphere" to blacklisting conspiracy theorists, with much worse a hell reserved for them than the rest.

From now on, we are instructed to vote Macron, no matter what, without asking questions, and without addressing the flagrant inadequacies of the man. We are urged to put up with the imbecilities of his supporters, who rave about their alleged intelligence.

Such is the democracy that we must praise every morning. We must never question official propaganda and accept anything and everything as revealed truth as soon as it is pronounced by one of the caste's priests.

Otherwise, blacklisting awaits you, followed by the Inquisition's torture.

To free oneself from one's fears, from this fear of losing one's social status, it is essential to fully understand what credibility is... and the ineptitude it constitutes.

Credibility is the ability of others to believe in you, especially when you say something. It does not appeal to reason, but to social appearance, to the imagination, per Blaise Pascal.

In itself, therefore, credibility is of no importance or substance. It boils down to the representation that others have of you, and does not concern your personality in an of itself.

Credibility, the weapon of the caste

We understand here why credibility is the favorite weapon of the caste, since it allows people to be held not by force, but by the fear of being ostracised from society.

It assumes of course that individuals are afraid of the gaze of others, and this requires two conditions.

The first condition is that the gaze of others be manipulated by the caste. It is for this reason that, over time, the caste has industrialised its cultural hegemony and “imposed its narrative” on public opinion. This strategy has notably gone through an almost systematic appropriation of the major media, which “set the tone”.

Thanks to this arsenal, it is possible to ridicule or discredit any stubborn objector.

The second condition is that each individual feel that he is a member of a community upon which he depends (the famous Hegelian myth of civil society which is not limited to the sum of the individuals who compose it). This acquired need to not be banished becomes a crucial emotional issue.

It is the social application of the dialectic of master and slave. Slaves need the approval of the master, including the Master State, to be happy.

Emancipating oneself from the master's gaze

Everyone takes a big step in life when they stop adjusting their actions to the gaze of their imaginary masters, and when they become a free person, that is to say a responsible citizen who acts according to justice and indifferent to social censure.

In the second round of the presidential elections, I advise everyone to take this step.

In this case, what disapproval do you fear from fullfilling your desire to drive out an unworthy President who has regularly spoken contemptuously of his fellow citizens whilst abroad, and who has indebted the country to a level previously unknown? This sinister individual, surrounded by an impressive band of incompetent liars (remember the historic performance of Christophe Castaner at the Ministry of the Interior, the exits of Sibeth Ndiaye, and so on), was any of them justified in giving you lessons in credibility?

Everyone's life changes, when they understand what equality between humans means: no one is entitled to disqualify, to discredit, another, nor to forbid him to say or think what he believes to be right.

A just action does not suddenly become unjust because some paid hack from Le Monde or Liberation has declared it to be so.

The weakening of the caste and its cultural hegemony

Moreover, today it is easier to “confront” the system openly than ten years ago. Since the 2008 crisis, a growing number of people at leastvunderstand that something is fundamentally skewed in the organisation of society.

I know very few macronists today who tell me that they're voting for Macron out of conviction, or who think the condition of our country is alll shining and healthy. All of them are well aware that an infernal propaganda seeks to pull the wool over our eyes.

So, do not deny your own pleasure, since the price to be paid to achieve it has dropped considerably.

If you can't stand this moralising and greedy caste, get rid of it, even by voting for Marine Le Pen.

She will not do any worse than her predecessor. And forget about the gaze of those who seek to enslave you.

France’s Marine Le Pen Vows to Recompensate Workers Who Were Fired for Being Unvaccinated:

Related:  French Despot tells the Unvaccinated: "You are no longer citizens!"