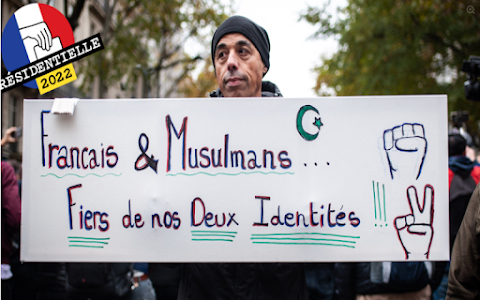 I will admit to being amazed at the magnitude of Macron's victory on Sunday night. Although the phenomenon is known and documented by specialists in psychology, I still do not understand how an abused person can love their sadistic tormentor in return.

As for me, although I am a Muslim, pro-Palestinian, and although I eat halal meat and think that preventing a woman from wearing the veil is an unjustified and unfair attack on her freedom, I will vote, without any kind of hesitation, for Marine Le Pen on April 24th.

Realising that this might seem insane, I will now explain the reasons why this choice is in fact natural and necessary. It's not only about convincing my co-religionists but also about reassuring the commendable but, in my view, exaggerated and, let us say, misplaced fears of non-Muslims who are sincerely concerned about what our fate would be if Marine Le Pen were elected.

First of all, it is quite obvious that this vote is not an unconditional agreement. However, it is important to understand to what extent Emmanuel Macron constitutes the real danger.

FIVE YEARS MARKED BY AN UNPRECEDENTED DECLINE IN FUNDAMENTAL FREEDOMS

First of all, we need to remember the liberticidal measures that have been inflicted on us during the last five-year term. This is in order to balance them against the most divisive measures of Madame Le Pen, and also to make it clear what awaits us if Macron is re-elected, since we know that he will understand his re-election as a plebiscite.

Let us remember that for about a year, Macron deprived the entire population of an incredible number of freedoms such as the right to move, the right to assemble and the right to work for a large number of French people, especially restaurateurs. Then from August 5, 2021, it was the health pass and then the vaccination pass. The Health pass still deprives part of the population of free access to the hospital because of their personal choice not to be injected with a medical product. We remember the images of poor people turned away from supermarkets because they didn't have the precious open-sesame pass.

If the vaccination pass were reimposed tomorrow, which is sure to happen in the event of the re-election of the outgoing president, we should realise that, with a vaccination schedule decided by decree and without parliamentary consultation, we may need 4, 5 or 6 doses to eat in a restaurant, to see our kids, to play tennis, to go to the gym or the library or to freely access a hospital.

Let us remember that patients and people in EHPAD (residential care homes) have seen their visiting rights severely restricted (sometimes only 30 minutes a day) when they were not simply revoked, in the event of a positive PCR test.

THE REAL RISK OF DICTATORSHIP

It is also important to realise how decisive the April 24th zero hour might be, not only for the next 5 years but possibly for several generations, or even the next half-century. Few French people are aware that in the event of Macron's re-election, the very existence of democracy and universal suffrage will be threatened in France.

Indeed, we have seen with what authoritarianism Macron reigned. Attempts to restrict the freedom of the press (Avia Law) have already taken place before these projects were interrupted by the arrival of the “pandemic”.1

Let us also remember the submissions repeated ad nauseam by the Council of State and the Constitutional Council in the face of measures of confinement and discrimination by the executive. Let us remember the laws with fundamental issues (health pass and vaccination included) readjusted at 0:00 a.m. to be voted on again at 3:00 a.m. by a handful of exhausted and confused deputies.

Might we ask if la macronie, being up to its neck in extremely sensitive matters (suspicion of collusion with McKinsey, vaccines side effects, etc.) means that Macron will not risk a new presidential election in the traditional manner? Let us remember that Macron and Attal repeated to anyone who wanted to listen that they were going to “renegotiate” the social contract to put duties before rights,3 4 Is it possible that the right to vote might be subject to a sanitary pass / vaccination in 5 years time? I have doubts as to the Constitutional Council's determination to oppose any such measures if they are “justified” by the “need to protect the population”.

Speaking of democracy, it is good to highlight the democratic measures that Marine Le Pen intends to put in place. Thus Marine Le Pen intends to institute the popular referendum initiative (RIP). If this measure were adopted, it would reinvigorate democracy in an unprecedented and positive way. This would ensure that vexatious measures could not be imposed against the opposition of the majority of the population. Similarly, proportional representation in the legislative elections would make it possible to obtain a much fairer representation of the political currents that run through French society and thereby to have a real parliamentary opposition capable of curbing the totalitarian thrusts of a freewheeling president and executive.

A PROBABLE EASING OF TENSIONS UNDER LE PEN

Moreover, it is likely that an election of Marine Le Pen would paradoxically ease social tensions. First of all, it goes without saying that if Marine Le Pen acceded to the highest office, the media would indulge in shameless anti-RN propaganda. There is no doubt then that the black-blanc-beur (multiracial) France of 1998 (symbolised by its World Cup-winning team) and diversity will once again be celebrated, and racism will once again be slain on television, as we currently see between the two presidential rounds.

On the other hand, the election of Emmanuel Macron would actually increase popular resentment towards immigrant populations who will be considered the objective allies of a government mistreating the “native” French people. What's more, Macron, having been recognised by the whole of the left and benefiting from the benevolence of the media, will have a much freer hand than Le Pen to repress Muslims. What he will not fail to do is use the language of the RN (Le Pen's National Ralley) whilst allaying suspicion as he attacks movements that are deemed far right. Let us remember that it was under this government that the CCIF and Baraka City were dissolved,5 followed shortly after by... Génération Identitaire (a movement considered far-right).6 Let us also remember how Interior Minister Gérald Darmanin once reproached Marine Le Pen for her softness on the subject.

Finally, it must be understood that, the values ​​of my religion (in my opinion) are much more compatible with the values ​​of Madame Le Pen or even Éric Zemmour than with those of Emmanuel Macron. Madame Le Pen and Monsieur Zemmour can indeed be considered as conservatives defending a vision of society which, in essence, would absolutely not offend any other culture outside the West. I know how shocking this can be, but in my opinion, the differences between Islamic values ​​and Judeo-Christian values ​​are superficial and artificially hyped up. This is what people like Patrick Buisson understood.7

If we're honest, a Muslim is much more comfortable with the idea of ​​sending his child to a school where Christmas is celebrated than to an institution where sexual initiation lessons and LGBT propaganda have free rein from primary school.

There is no doubt that a Muslim prefers to live in a society where the veil is forbidden but childhood protected rather than a country where a minor could choose to "change sex" with hormones and a scalpel, and without the agreement of his parents if necessary. Although we are not yet there in France, that is where Emmanuel Macron and La République En Marche are taking us. As proof, a bill for the teaching of sexual identity at school has already been tabled by an LREM deputy and the debate is already raging in Anglo-Saxon countries with regard to sexual transition therapies for minors, even against parental wishes, in California8 and the United Kingdom,9 among others.

In summary, while Marine Le Pen's programme does attack certain concrete but actually superficial aspects of my religion, Macron's programme threatens the fundamental values ​​of all spirituality and threatens the bases of our humanity. Values ​​such as freedom, the sacredness of the human body and that of childhood are for me non-negotiable.

It is because I prefer women to be prevented from veiling rather than 6-year-old children being forced to wear masks, because I prefer ritual slaughter to be prohibited rather than being treated like cattle with health and vaccination passes, because I prefer to have Christmas celebrated at school rather than LGBT propaganda in school textbooks, because I prefer the popular referendum initiative to a concentration of all powers, and because I am afraid of the long-term establishment of a sanitary-technological tyranny if we let this opportunity pass, that I will be voting for Marine Le Pen on April 24th. 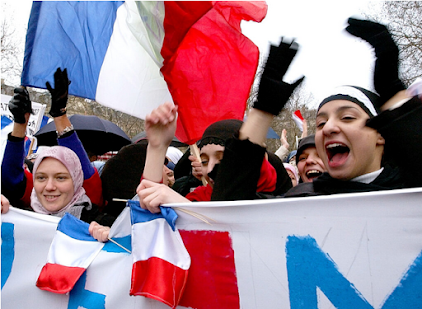