On the Ultimate Cause


Every human being is curious about “something”. It is true that this "something" can be different in each person but not curiosity, which is, in itself, indistinguishable. Curiosity is a common feeling that unites us all, beyond all differences. And if we all share it, must it not be because it's in our nature? Isn't it because human beings are essentially curious?

To say that curiosity is essential is like saying that there is nothing that causes it. It is like saying that it is the ultimate cause. Beyond curiosity there is nothing and there are different objects at which we direct it. We are free to choose to project our curiosity on this ot that object but not to choose whrether or not to be curious. Curiosity is therefore an obligation: It forces us to increase our knowledge, to evolve, to improve ourselves. It is inevitable.

Letting oneself be carried away by curiosity is therefore "natural". It is how we inform ourselves and become aware. It is true that this awareness can be potentiated, more or less, depending on how we project our curiosity on this or that object. The choice of the object will speed up or slows down this evolution but can never stop it completely, because being alive means going through certain experiences and acquiring some level of knowledge, even if unintentionally. Curiosity and transcendence are, therefore, “the same thing”: Curiosity adds knowledge with which it surpasses -or transcends- what we had before, and thus it grows and broadens consciousness. (The human being is like a volcano, that is, a mountain that grows upon its own ashes, and it is an apt metaphor).

If in order to accelerate evolution it is necessary to give free rein to curiosity. To slow it down it would be necessary to tie it up, which is what we attempt to do with children, for example, through the "educational system". We substitute their inexhaustible curiosity with beliefs that, being illogical, cannot be reasoned through and stunt the natural expansion of the mind. Beliefs do not grow and cannot, therefore, cause any growth. That is why they are valid for people eight years old, or also eighty years old.

Believing always entails backwardness and sectarianism. According to the dictionary, a sect is either a doctrine that differs from another, or the group of followers of that doctrine that differs from another. The dictionary emphasises differentiation, separation. A sect is thus a self-marginalisation of certain human beings who tend to close their minds and even lock up their bodies, as the Jews did, already in the Middle Ages. with their aljamas (or “ghettos”).

Being sectarian therefore implies maintaining the will to remain separate and also maintaining the will not to be carried away by curiosity. No sect encourages curiosity or the love of surprise, but, on the contrary, they all encourage ritual and repetition, which is by definition a boycott of curiosity. No sect foresees the overcoming of their beliefs and that gives us an indication of their insignificance. Every belief collides with one's own experience and blocks reasoning, with the growth of knowledge, awareness and mental evolution.

Every believer would be condemned not to evolve, to remain eternally chained to his beliefs, if it were not because it is impossible to "unplug" curiosity. And so, it is his own curiosity that leads him, sooner or later, to become disillusioned with his beliefs. And what is disillusionment if not a return to reality and the end of delusion? There are not a few who, disillusioned, have abandoned and are abandoning institutionalised religions and also political parties, realising that these are sects that keep us separated and entrenched, without any possibility of overcoming or transcending that separation. The abandonment of sectarianism, of partisanship, is necessary and essential to continue evolving towards the understanding of unity, and towards the ultimate cause. And it is happening, whether you like it or not.

Each of us can all speed up or slow it down our individual process, depending on the object upon which we project our attention, but stopping it is impossible.

Because who could kill your curiosity? Is it possible kill God? 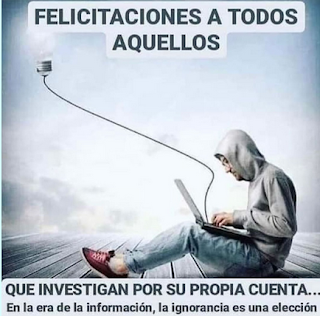