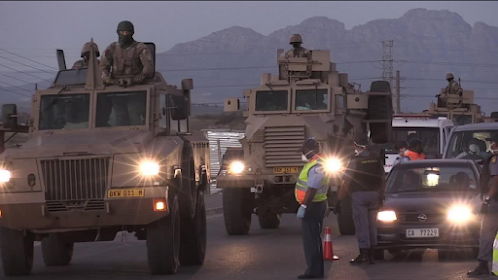 This may well be one of the most important pieces I have written on the current global crisis. Please share widely. (CW)

At a time when countries like Britain, France, and Switzerland are easing their draconian restrictions, the ANC-led South African government has not only extended the official state of disaster, they are now looking to make good on the promise to reset the country permanently, into a dark new era of permanent masking, social distancing, quarantining, and vaccine passports.

The following restrictions would be made permanent with even some expansions from the existing regulations:

In a separate proposal, the government is seeking to include compulsory vaccination at places of employment within perpetual health and safety regulations regarding the workplace. Mandatory vaccination and the disclosure thereof would become part and parcel of the ‘risk assessment’ regime which the country has already imported from the West.

What is always striking is the absence of discussion in the media as to how vaccines are meant to improve safety in the office or factory or workshop. It is more than likely they do the opposite.

Ominously, the health minister made it clear when tabling the new draft regulations that the guidance had come from what is called the National Joint Operational and Intelligence Structure, a body with no legislative oversight brought to the fore at the same time that the country’s National Coronavirus Command Council came to absolute power. There is no need for parliament to take a vote on this - the Health Minister can simply direct these new regulations after the time-frame for public comment is over next month.

The leading opposition party, the Democratic Alliance, has indicated they will challenge this new regime legally but not much hope can be derived from this liberal political party, considering how its top brass made buffoons of themselves during lockdown by posing for photographs such as this: 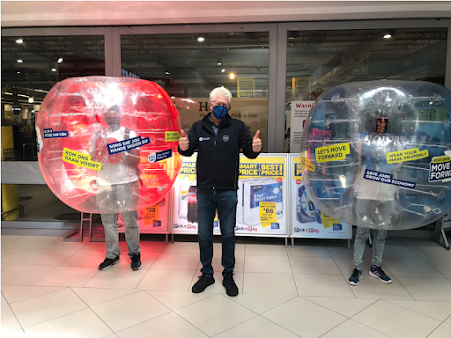 South Africa had one of the harshest lockdowns in the world. Over 400 000 people were arrested for leaving their homes during the highest levels of lockdown, alcohol and cigarettes were banned, and a strict nightly curfew was maintained for over a year. Even today, the country, including all its schoolchildren, remains masked and crowds have not returned to beloved rugby and cricket grounds.

Despite this, the nation’s scientists believe mass immunity has been reached, largely because the virus continued to spread throughout the lockdown. In short, the lockdown had no benefits, yet its harms were historic, catapulting the unemployment rate to 35%, the highest in the world. In the middle of the lockdown, when the former President was briefly jailed for contempt of court, a fire was lit and resulting riots led to over 300 deaths, the looting of hundreds of malls, and destruction of over a billion dollars’ worth of property.

Bizarrely, these same scientists, while implicitly admitting the utter failure of their protocols, continue to call for mandated vaccinations and masking, whilst now criticizing the government from the other side of their mouths for the continued ‘hard’ lockdown.

Why should there be any restrictions if everybody has already contracted the virus? We are never told, and the media never asks.

The central mystery here is why the South African government is so willing to destroy the social fabric of its own country. The scientists who called for lockdown originally admit now that covid will likely kill far fewer people in 2022 than influenza. Other countries are easing the restrictions to try get some semblance of normal, healthy life back, particularly for their children. Meanwhile, the ANC is pushing ahead with the Great Reset many believed had been put on ice in the West.

One possible answer to this dark mystery lies in the pending World Health Organization treaty which would outsource virus management to extra-national bureaucrats, unaccountable to citizens. South Africa is a central player in the ongoing drafting of a new global accord which would give unprecedented power to an organization whose largest donor is Bill Gates.

In this theory, South Africa emerges perhaps as a kind of prototypical outpost of the liberal empire (much as its progressive constitution and devout faith in affirmative action served as a model), maintaining and testing the architecture of a new era of digital ID, mass compulsory vaccination, and a new society in which group activity and identity exists at the whim of global elites.

If this is the case, could it be that while covid fades everywhere, South Africa and WHO get ready for a new window of opportunity to ‘build back better’ when fr4esh Chinese and Korean variants and lockdown mania reaches the West and thus global consciousness once again?

China is already locking down major cities, whilst South Korea and Hong Kong, masked and triple-jabbed, is recording record highs in cases and deaths: 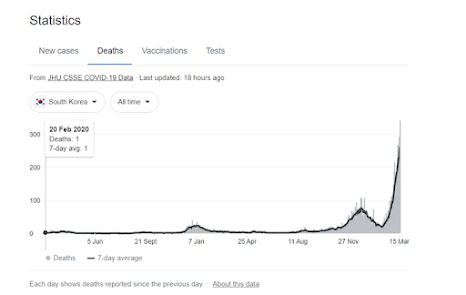 Previously, I noted that we are still living under the siege of our governments, in a permanent state of war.

This seems set to continue in perpetuity.

One feature of warmongering regimes is their desire to sacrifice the best of their young men.

This perhaps provides a clue to why such an obviously failed vaccine is still being mandated. (The failure made most obvious by simply looking at the Israeli covid death chart.)

Indeed, one former Wall Street executive has put his quantitative skills to some decent use and calculated that last year in the US, the millennial generation, ages 25 to 40, experienced a catastrophic rise in excess death. With the onset of vaccine mandates, young adults experienced what he calls an autumn of Vietnam War-level mortality: 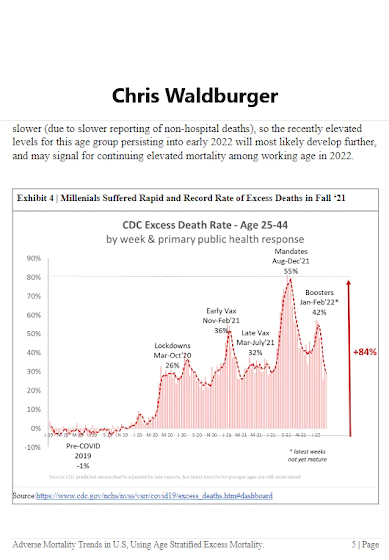 61 000 extra deaths occurred in this age group - a demographic at virtually no risk of covid - and who were meant to have largely been immunized by the vaccine!

You can verify his findings here where you can find the following data: 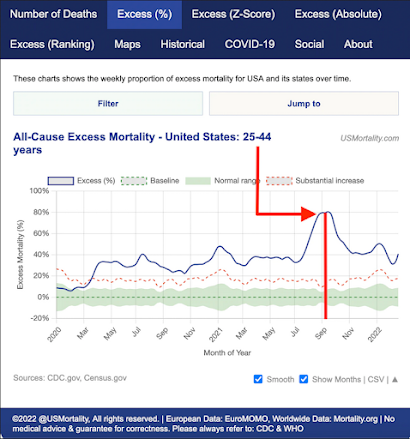 I have already reported on this same phenomenon evident in Europe which was equally confirmed by German insurance data, which I reported on here.

Mass increase in death driven by vaccine mandates and aggressive perpetuation of bio-security regimes by the likes of South Africa point to something truly hideous being born right before our eyes.

South Africans should not really be to surprised however.

The de facto ruler of the country in a state of disaster is the Minister of Cooperative Governance and Traditional Affairs, Nkosazana Dlamini-Zuma, former president Jacob Zuma’s ex-wife and former Chair of the African Union.

At the beginning of her reign she made no attempt to conceal the real agenda, stating:

“However, Covid-19 also offers us an opportunity to accelerate the implementation of some long agreed-upon structural changes to enable reconstruction, development and growth. These opportunities call for more sacrifices and – if needs be – what Amilcar Cabral called ‘class suicide’, wherein we must rally behind the common cause. The coronavirus knows no class, race, gender or geographical location.”

*Cabral was a Central African Marxist revolutionary who died in 1973.

Perhaps there is no real mystery here after all.

Just as the World Economic Forum has been promising us a future in which we will own nothing and be happy, in South Africa, we are told explicitly that the future will not include property owners outside of the global elite.

All the machinery of our new dictatorial regime points in one direction. 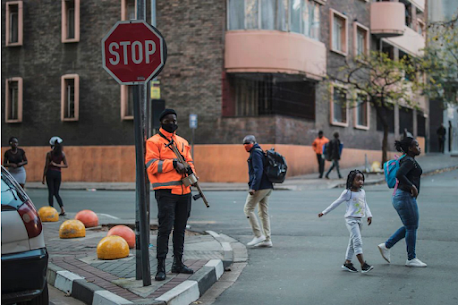