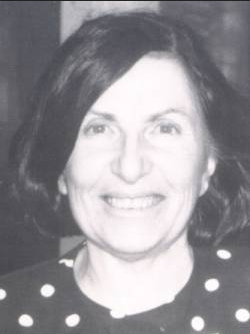 It is truly a blessing when we come across the work of those we do not know yet through their words, we find a connection that transforms us in unexpected ways. People can have profound impacts on our lives without the person ever knowing us and without them ever realizing it. Eleni Papadopulos-Eleopulos was such a person in my life. I do not know Eleni and sadly never got the chance to communicate with her as she passed away yesterday. However, the work that Eleni did through the Perth Group dissecting the HIV-AIDS dogma was instrumental in my awakening to the “virus” lie. It would be remiss of me if I did not honor her in some way. The best way that I can eulogize Eleni is to present a selection of her work with the Perth Group as well as provide links to interviews she has done throughout her career. My hope is that you can come away with a similar positive life-changing experience from Eleni just as I did.

For those who do not know about Eleni and the Perth Group, this is a brief summary about the group from their site:

“The Perth Group of was formed in 1981 in Perth, Western Australia. The three original members are the leader, biophysicist Eleni Papadopulos-Eleopulos, emergency physician Valendar F Turner and Professor of Pathology John Papadimitriou. Over the years several other scientists have contributed to or joined the Group. These are physicists Bruce Hedland-Thomas, David Causer and Barry Page, Florida USA biochemist Todd Miller and Colombian physician/medical researcher Helman Alfonso. The Perth Group has published scientific papers and letters in peer reviewed medical journalsas well as in the popular press. Two of the group are invited members of the Presidential AIDS Advisory Panel and have presented our material in various forums including the Presidential Panel and via satellite at the Geneva International AIDS Conference.” 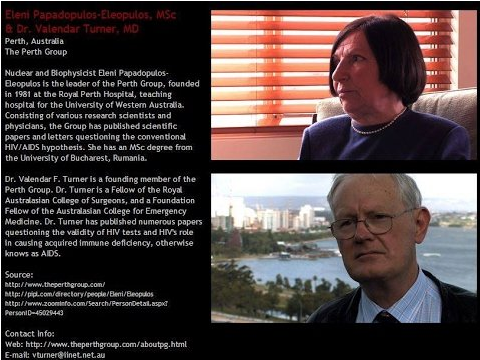 Eleni and the Perth Group were prominent in the AIDS reappraisal movement and argued several points which destroyed the HIV=AIDS dogma. These include:

A great overview of the views of the Perth Group was presented by Eleni in the below 1997 article. You can see that Eleni and the Perth Group laid the foundation for the main arguments many of us use to disprove virology today. They argued that there were no purified/isolated HIV particles, that the EM images were random particles picked out from impure preparations, that the antibody results are unproven and nonspecific, and that the use of antibody/protein reactions as proof in lieu of purification/isolation is illogical and unscientific.

A CRITIQUE OF THE EVIDENCE FOR THE ISOLATION OF HIV

A Summary of the Views of Papadopulos et. al.

The proposal that AIDS is caused by a unique, infectious retrovirus requires proof for the existence of such a retrovirus. Since the announcement of the discovery of certain laboratory phenomena claimed as proof of the existence of HIV we have critically analysed the data and have always maintained that no such proof exists [1-11].

A virus is a microscopic particle of particular size and shape (morphology) which contains particular constituents (biochemical properties) and which is able to replicate only at the behest of living protoplasm, that is, a virus is an obligatory intracellular parasite. Replication of a virus-like particle is the property which defines the particle as being infectious, that is, virus-like particle + replication = virus. These defining data determine that the only way to prove the existence of a novel (new) virus is to (i) isolate viral-like particles, that is, first obtain the particles separate from everything else; (ii) determine their morphological characteristics; (iii) analyse their constituents (nucleic acid and proteins) demonstrating that such properties are those of retroviruses and are unique; (iv) prove that the particles are infectious, that is, when pure particles are introduced into non-infected cell cultures, new but identical particles appear. Only then can the viral-like particles be deemed to a virus. In the case of retroviruses, the steps in this procedure were developed over the half century that preceded the AIDS era and are described in Toplin and Sinoussi. [12,13]. These steps are:

1. Culture of putatively infected cells demonstrating that such cultures contain retroviral-like particles, that is, particles virtually spherical in shape with a diameter of 100-120nM and with “condensed inner bodies (cores)” and surfaces “studded with projections (knobs)” [14].

2. Purification of a sample by ultracentrifugation through a sucrose density gradient. A test tube containing a solution of sucrose, ordinary table sugar, is prepared light at the top but gradually becoming heavier towards the bottom. A drop of supernatant (decanted) cell culture fluid is gently placed on top of the sucrose column and the test-tube is centrifuged for several hours at extremely high speeds. This generates tremendous forces forcing any particles present through the sugar solution until they reach a point where their buoyancy prevents further penetration. For retroviral particles this occurs where the density of the sucrose solution reaches 1.16 gm/ml. At this the point the particles concentrate or, to use virological terminology, this is where the particles band. The 1.1 band is then selectively extracted for further analysis.

3. Using the electron microscope (EM), photograph the 1.16 band proving there are particles of the correct morphology and no other material.

4. Disrupt and analyse the constituents of such particles.

5. Introduce pure particles into a virgin culture and, by repeating the above steps, prove that identical particles are produced.

To date, many electron micrographs of particles claimed to be retrovirus-like have been published. However, not one of these micrographs demonstrates particles satisfying both main morphological features of retroviral particles, that is, a diameter of 100-120nM and a surface studded with knobs. (HIV researchers are unanimous that the knobs contain a protein, gp120, which is essential for the first step in infection and replication, that is, for the particle to fuse with the membrane of an uninfected cell in order that the HIV particle with its ‘HIV RNA” gains access to the interior of the cell [15].

To prove the existence of HIV, both Montagnier’s group in 1983 and Gallo’s group in 1984 banded supernatant in sucrose density gradients. However, until March 1997, for unknown reasons, neither these groups nor anyone else had ever published an electron micrograph of the banded (purified) material to show which if any of the many different variety of particles seen in gross cell cultures [20] are present at 1.16 gm/ml. Indeed, until March this year it was not possible to know whether any structured material whatsoever was present at the density which defines retroviral particles. Nonetheless, from the time of the Montagnier and Gallo studies [16,17], the material from culture supernatants banding at 1.16 gm/ml has been regarded as pure HIV particles. Acting on this premis, the proteins which are present in this band and which react with antibodies present in the sera of AIDS patients are claimed to be the HIV proteins and the antibodies reacting with such proteins the HIV antibodies. Similarly, a particular portion of the RNA banding at 1.16 gm/ml is claimed to be the HIV genome. All these conclusions were drawn without ever proving that the proteins and RNA are structural elements of a particle, viral-like, retroviral-like or any other particle of any other kind, that is, without any scientific basis.

This March, two papers [18,19] were published with electron micrographs of sucrose density gradient banded material. In one of these papers the authors confirmed that:

“Virus to be used for biochemical and serological [using “viral” proteins to test for antibodies in patients] analyses or as an immunogen [to produce antibodies in animals and test patients for “viral” proteins] is frequently prepared by centrifugation through sucrose density gradients. The fractions containing viral antigen [proteins] and/or infectivity are considered to contain a population of relatively pure viral particles” [19] (italics ours).

However, to the contrary, the data in these papers support our claim that the existence of HIV is unproven:

1. The authors of both papers concede that the particles which are present in the banded material and which are said to be HIV represent only a very small fraction of the total material. Gelderblom et al. state that the material contains “an excess of [cellular] vesicles with a size range 50-500nm, as opposed to a minor population of virus particles…cellular vesicles appear…to be a major contaminant of HIV preparations enriched by sucrose gradient centrifugation”.

Thus, by definition, the particles cannot be retroviral-like particles and even less, a unique retrovirus, HIV. Furthermore, the particles noted by Gluschankof et al. and Bess et al. cannot be the same particle. Indeed, the method adopted by all HIV researchers for proving the existence of HIV, that is, excluding proof based on purification of particles with retroviral morphology shown capable of faithful replication but rather by detection of antibody/protein reactions, does not satisfy any scientific principle and defies common sense. 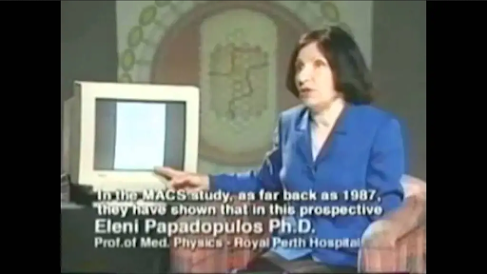 There is no way that I can do justice and summarize the amazing work that Eleni and the Perth Group provided throughout the years. Eleni was a trailblazer and a rare scientist who was honest enough to question the dogma and challenge the evidence presented by the establishment. Presented below are links to many of the groundbreaking and truly enlightening papers, both published and unpublished, that helped to expose the “virus” lie:

The redox theory of cellular function

Papers published in the popular press

Papers and letters rejected by editors of scientific journals

Besides the above papers, Eleni was featured in House of Numbers and The Emperor’s New Virus? documentaries. I have provided links to both and I highly recommend taking the time to watch them. I have also included a link to a news segment featuring Eleni and the Perth Group discussing the HIV fraud: 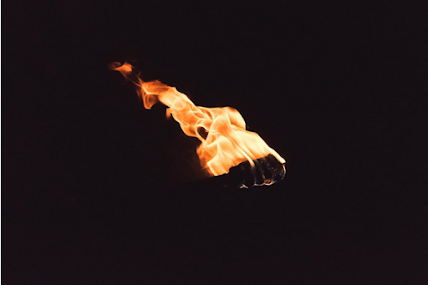 Eleni was a torch bearer who shined a light in the darkness and paved the way for those of us currently fighting to expose the fraud of virology for all to see. Eleni and the Perth Group gave scientific credibility and validation to the argument that the particles assumed to be “viruses” had not been properly purified and isolated nor proven pathogenic. She touched the lives of many and left an indelible mark on the crusade for truth. Eleni’s time carrying the torch may be over, but her work lives on and her influence can be seen in those of us who will pick up the torch and carry it for her going forward. 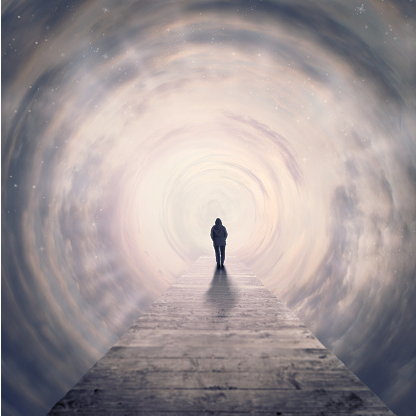