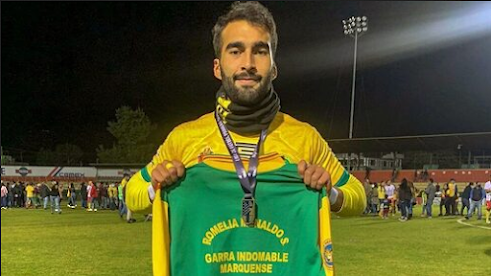 The situation is becoming critical. More and more sports people are dropping dead in training or during games. This time, the name of Marcos Menaldo must be added to the list. The 25-year-old soccer player from Deportivo Marquense, a Guatemalan First Division (Liga de Ascenso) club, fainted during practice on the morning of January 3rd and had to be taken to hospital, where he finally passed away.

The 25-year-old defender had complained he was finding it difficult to breathe during a pre-season session as he geared up for the new campaign alongside his teammates. Menaldo collapsed at the Marquesa de la Ensenada Stadium. After receiving emergency CPR treatment on the pitch, he was transferred to the Hospital de Especialidades where he died.

A centre-back by trade, Menaldo was a fan favourite due to his efforts during Deportivo's successful second division title win last term, crowned Liga de Ascenso champions in December, coincidentally on the day of Menaldo's 25th birthday.

"You can't help being astonished. A young, dynamic and happy person, and this happens to him. It's quite shocking and impactful because you lose not only a player, you lose a friend. God has his plans and his purposes, but unfortunately we have death...They transferred him to the assistance centre where they did everything possible. But unfortunately, the death was confirmed."

His death is not the first to shock football in recent weeks, nor the first cardiac arrest. Croatian footballer Marin Cacic died in similar circumstances before Christmas after a suddenly collapsing during training. The 23-year-old was diagnosed with heart failure after being rushed to a nearby hospital. Similarly to Menaldo, doctors fought to save Cacic's life, but the Croatian was pronounced dead on December, 23rd.

Omani footballer Mukhaled Al-Raqadi passed away on December 22nd last year during the warm-up in the run-up to the match between his team, Muscat FC, and Suwaiq. The 29-year-old fainted with a cardiac arrest and, despite being taken to hospital, he died hours later. Al-Raqad was one of four footballers to die in the same week preceding Christmas.

European football has seen a huge number of notable players collapse during games over the last 12 months. Perhaps the best-known case was that of Christian Eriksen, the Denmark national team player who suffered a cardiac arrest in the Eurocup match against Finland. Although the doctors managed to save Eriksen's life, the event shocked fans the world over. Others players who returned from the brink of death include:

The former TottenhamHotspur midfielder collapsed during the latter stages of the first-half of Denmark's contest with Finland.

Sheffield United midfielder John Fleck also fell to the turf unchallenged during a recent Championship clash, though he has since returned to action for the Blades.

Manchester United central defender Victor Lindelof had to be replaced last month due to complaining of chest pains during the 1-0 away win over Norwich, but the Swede has also featured since the scare.

Earlier this season, a Champions League clash between Sheriff Tiraspol and Real Madrid saw winger Adama Traore collapse to the turf clutching his chest, before pitch-side medics instantly rushed on to treat the Mali international.

And, of course, Barcelona star Sergio "Kun" Agüero had to retire from professional football due to developing a serious cardiac arrhythmia.

Alongside the survivors, lies a wave of fatalities that has shocked the world of football in 2021. An independent UK investigation has found that worldwide football / soccer match cardiovascular deaths in 2021 were 278% higher than the 12-year average. Those who are paying attention, of course, will note that this phenomenon is not limited to the world of football, and that a surge of dead athletes across various fields has also joined the list of footballers.