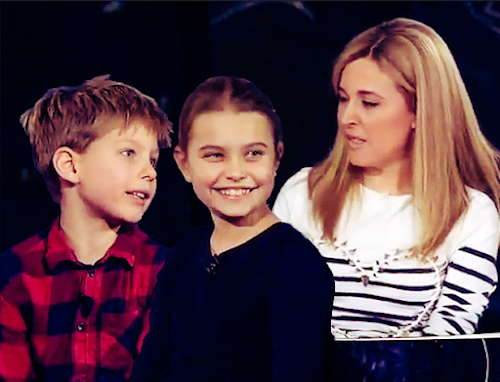 We often think we have reached rock bottom, but then begin to wonder if there is a bottom. Julie Snyder is a Canadian TV host who is also known in France from her show Vendredi, c’est Julie.. During her talk show La Semaine des 4 Julie broadcast on Tuesday January 18th, 2022, Julie gave the floor to two kids so that they could give their opinion on vaccination.

It provoked an outcry on social media, and for good reason. The host asked the children if they were for vaccination, to which they replied yes. She asked another question: “What should we do with people who do not want to be vaccinated?” The children responsed: “We should call the police", “If they don't have their vaccine, it could put a lot of people at risk, so as the government is doing right now, we have should restrict them until they get tired of it and get vaccinated.”

The reaction on the set became infamous, everyone present applauded with smiles on their faces. Health propaganda is using children to convey ideas of extreme violence against the unvaccinated, with the latter reduced to the condition of a punching bag upon which children are invited to let off steam. The abomination unfolds with laughter and applause in order to promote the segregation of part of the population.

The sequence did not go unnoticed on social networks. An outcry was heard, forcing Julie Snyder to apologise.

(“Last Tuesday (yesterday) I made a mistake by asking children what they thought of vaccination. I apologize to those who have been offended by this. I'm very sorry about that.”)

Are these sincere apologies? Internet users strongly doubt it since the person that calls herself the “barometer of hate in Canada” found the idea of depriving the unvaccinated of employment benefits interesting. It allows us to better understand the leading question she asked the children: “What should we do with people who do not want to be vaccinated?”

Why should we be surprised that after hours of television, sponsored video games, and formatted school lessons, that children regurgitate what they see and hear? Political manipulation takes over from purely commercial advertising. The whole society is conceived of as a Truman Show in which Julie Snyder would be one of the actresses. In other words, the real world has given way to a virtual (and profitable) world in which young and old are unable to exercise any critical thinking.

Fascist propaganda with children on Quebec TV to incite hatred and violence (and yes, jailing people who have committed no crime is violence).