Brazilian anchor has 5 cardiac arrests after 3rd vax dose. Media is certain it was "just a coincidence." 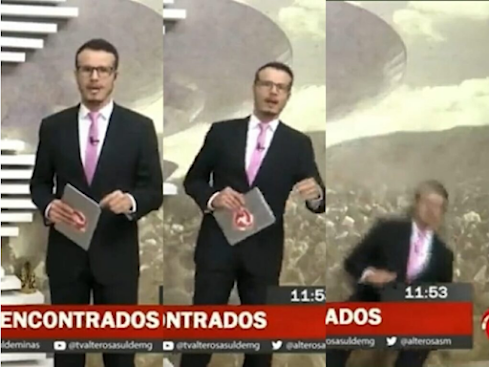 A news anchor collapses live on air just days after receiving his third vaccine dose. But fear not: there is "no relation" between the two events.

A video of news anchor Rafael Silva has gone viral in Brazil. Silva was presenting the news on TV Alterosa when he suddenly collapsed in live transmission, forcing the broadcast to be cut immediately.

The 36 year-old, from Alterosa Alerta in Minas Gerais, collapsed on Monday 3rd January. In a statement, the TV stationa said the journalist was quickly assisted by the Mobile Emergency Care Service (Samu) and taken to the Humanitás hospital, a few kilometers away. Later reports revealed that the anchor had suffered five cardiac arrests while in the ambulance on his way to the hospital.

Just days earlier, on December 28th, Silva had followed the peculiar trend of advertising his vaccination status on social media. As has become custom, his post on Twitter was accompanied by a photograph and a message:

I’m sorry for people who don’t have this opportunity. 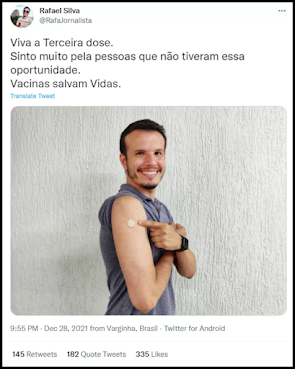 A day after his collapse, the journalist's condition was said to have stablised as he responded to treatment. But many Brazilian social media users had already mused aloud about a link between the cardiac arrests and the booster shot. Brazilian news media, however, is unanimous:  Anyone who sees such a relation is promoting "fake news".

“Many evil people are politically exploiting the vaccination issue, saying that he had had this sudden illness because of the third dose. According to experts, this has already been discarded.The suspicion, according to the doctor who is attending him, is that Rafael has a congenital heart disease, the suspicion is that he was born with this heart problem, and that no one had identified it.”

While we are in the realm of suspicion, however, here is another one:

Rafael Silva's five cardiac arrests is one more example of the explosion of myocarditis that can lead to cardiac arrhythmia and death, a phenomenon that is amply demonstrated in the scientic literature, recognised by the American CDC and even led the government of Japan to place an official warning label on the vaccines to this effect.

For those who have followed the independent investigations into the undeclared constituents of the vaccines' lipid nanoparticle delivery system, none of this will be even slightly surprising. The reason for the large scale circulatory system disturbances is principally the interaction between graphene oxide and the electromagnetic fields to which the vaccinated are exposed. This also explains why "radiation workers" such as airline crew have been disproportionately affected by these shots.

Brazilian news media, however, is as conveniently oblivious as its homologues abroad. In one of its "fact-checking" asides, Brazil's UOL  is even bold enough to include in its vaccine-related "fake news" the sudden death of 28-year old singer Maurílio, who passed away in Goiânia in December after suffering three heart attacks. Maurílio, like Rafael Silva, had also been a true-believer and, after his two jabs, had posted on his Instagram page almost the exact same message as Silva:

“I’m messed up but I’m immunised! 2nd dose is in the arm!

GET THE VACCINE!!! Vaccines save lives”

How many more people must die or be crippled for life before the world wakes up to what is happening?

Can the superstitious faith in vaccines be so deeply rooted that even the most obvious causal relationships are screened out indefinitely?