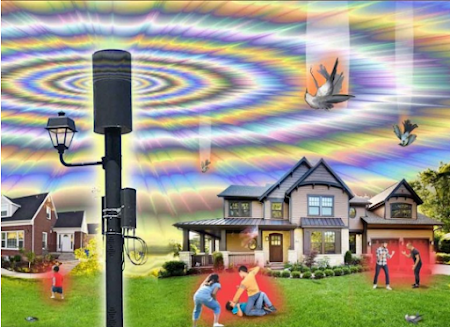 Coronavirus disease (COVID-19) public health policy has focused on the severe acute respiratory syndrome coronavirus 2 (SARS-CoV-2) virus and its effects on human health while environmental factors have been largely ignored.

In considering the epidemiological triad (agent-host-environment) applicable to all disease, we investigated a possible environmental factor in the COVID-19 pandemic: ambient radiofrequency radiation from wireless communication systems including microwaves and millimeter waves.

In this study, we examined the peer-reviewed scientific literature on the detrimental bioeffects of WCR and identified several mechanisms by which WCR may have contributed to the COVID-19 pandemic as a toxic environmental cofactor. By crossing boundaries between the disciplines of biophysics and pathophysiology, we present evidence that WCR may:

(1) cause morphologic changes in erythrocytes including echinocyte and rouleaux formation that can contribute to hypercoagulation;

In short, WCR has become a ubiquitous environmental stressor that we propose may have contributed to adverse health outcomes of patients infected with SARS-CoV-2 and increased the severity of the COVID-19 pandemic. Therefore, we recommend that all people, particularly those suffering from SARS-CoV-2 infection, reduce their exposure to WCR as much as reasonably achievable until further research better clarifies the systemic health effects associated with chronic WCR exposure.

Assessing the potentially detrimental health effects of WCR may be crucial to develop an effective, rational public health policy that may help expedite eradication of the COVID-19 pandemic. In addition, because we are on the verge of worldwide 5G deployment, it is critical to consider the possible damaging health effects of WCR before the public is potentially harmed.

COVID-19 began in Wuhan, China in December 2019, shortly after city-wide 5G had “gone live,” that is, become an operational system, on October 31, 2019. COVID-19 outbreaks soon followed in other areas where 5G had also been at least partially implemented, including South Korea, Northern Italy, New York City, Seattle, and Southern California. In May 2020, Mordachev [4] reported a statistically significant correlation between the intensity of radiofrequency radiation and the mortality from SARS-CoV-2 in 31 countries throughout the world.

During the first pandemic wave in the United States, COVID-19 attributed cases and deaths were statistically higher in states and major cities with 5G infrastructure as compared with states and cities that did not yet have this technology [5].

There is a large body of peer reviewed literature, since before World War II, on the biological effects of WCR that impact many aspects of our health. In examining this literature, we found intersections between the pathophysiology of SARS-CoV-2 and detrimental bioeffects of WCR exposure. Here, we present the evidence suggesting that WCR has been a possible contributing factor exacerbating COVID-19.

Organisms are electrochemical beings. Low-level WCR from devices, including mobile telephony base antennas, wireless network protocols utilized for the local networking of devices and internet access, trademarked as Wi-Fi (officially IEEE 802.11b Direct Sequence protocol; IEEE, Institute of Electrical and Electronic Engineers) by the Wi-Fi alliance, and mobile phones, among others, may disrupt regulation of numerous physiological functions.

Non-thermal bioeffects (below the power density that causes tissue heating) from very low-level WCR exposure have been reported in numerous peer-reviewed scientific publications at power densities below the International Commission on Non-Ionizing Radiation Protection (ICNIRP) exposure guidelines [14]. Low-level WCR has been found to impact the organism at all levels of organization, from the molecular to the cellular, physiological, behavioral, and psychological levels.

The peer-reviewed world scientific literature has documented evidence for detrimental bioeffects from WCR exposure including 5G frequencies over several decades. The Soviet and Eastern European literature from 1960 to 1970s demonstrates significant biological effects, even at exposure levels more than 1000 times below 1 mW/cm2, the current guideline for maximum public exposure in the US. Eastern studies on animal and human subjects were performed at low exposure levels (<1 mW/cm2) for long durations (typically months).

Adverse bioeffects from WCR exposure levels below 0.001 mW/cm2 have also been documented in the Western literature. Damage to human sperm viability including DNA fragmentation by internet-connected laptop computers at power densities from 0.0005 to 0.001 mW/cm2 has been reported [22]. Chronic human exposure to 0.000006 – 0.00001 mW/cm2 produced significant changes in human stress hormones following a mobile phone base station installation [23].

Human exposures to cell phone radiation at 0.00001 – 0.00005 mW/cm2 resulted in complaints of headache, neurological problems, sleep problems, and concentration problems, corresponding to “microwave sickness” [24,25]. The effects of WCR on prenatal development in mice placed near an “antenna park” exposed to power densities from 0.000168 to 0.001053 mW/cm2 showed a progressive decrease in the number of newborns and ended in irreversible infertility [26].

Most US research has been performed over short durations of weeks or less. In recent years, there have been few long-term studies on animals or humans.

Illness from WCR exposure has been documented since the early use of radar. Prolonged exposure to microwaves and millimeter waves from radar was associated with various disorders termed “radio-wave sickness” decades ago by Russian scientists. A wide variety of bioeffects from nonthermal power densities of WCR were reported by Soviet research groups since the 1960s. A bibliography of over 3700 references on the reported biological effects in the world scientific literature was published in 1972 (revised 1976) by the US Naval Medical Research Institute [27,28].

More recently Russian studies confirmed earlier results of Soviet research groups on the effects of 2.45 GHz at 0.5 mW/cm2 on rats (30 days exposure for 7 h/day), demonstrating the formation of antibodies to the brain (autoimmune response) and stress reactions [30]. In a long-term (1 – 4 year) study comparing children who use mobile phones to a control group, functional changes, including greater fatigue, decreased voluntary attention, and weakening of semantic memory, among other adverse psychophysiological changes, were reported [31].

Key Russian research reports that underlie the scientific basis for Soviet and Russian WCR exposure guidelines to protect the public, which are much lower than the US guidelines, have been summarized [32].

An ongoing literature study of the unfolding pathophysiology of SARS-CoV-2 was performed. To investigate a possible connection to bioeffects from WCR exposure, we examined over 250 peer-reviewed research reports from 1969 to 2021, including reviews and studies on cells, animals, and humans. We included the world literature in English and Russian reports translated to English, on radio frequencies from 600 MHz to 90 GHz, the carrier wave spectrum of WCR (2G to 5G inclusive), with particular emphasis on nonthermal, low power densities (<1 mW/cm2), and long-term exposures.

Table 1 lists the manifestations common to COVID-19 including disease progression and the corresponding adverse bioeffects from WCR exposure. Although these effects are delineated into categories — blood changes, oxidative stress, immune system disruption and activation, increased intracellular calcium (Ca2+), and cardiac effects — it must be emphasized that these effects are not independent of each other.

For example, blood clotting and inflammation have overlapping mechanisms, and oxidative stress is implicated in erythrocyte morphological changes as well as in hypercoagulation, inflammation, and organ damage.

Although not peer reviewed, one of us (Rubik) investigated the effect of 4G LTE mobile phone radiation on the peripheral blood of ten human subjects, each of whom had been exposed to cell phone radiation for two consecutive 45-min intervals [51]. Two types of effects were observed: increased stickiness and clumping of red blood cells with rouleaux formation, and subsequent formation of echinocytes (spiky red blood cells).

Red blood cell clumping and aggregation are known to be actively involved in blood clotting [52]. The prevalence of this phenomenon on exposure to WCR in the human population has not yet been determined. Larger controlled studies should be performed to further investigate this phenomenon.

Similar red blood cell changes have been described in peripheral blood of COVID-19 patients [53]. Rouleaux formation has been observed in 1/3 of COVID-19 patients, whereas spherocytes and echinocyte formation is more variable. Spike protein engagement with ACE2 receptors on cells lining the blood vessels can lead to endothelial damage, even when isolated [54].

Rouleaux formation, particularly in the setting of underlying endothelial damage, can clog the microcirculation, impeding oxygen transport, contributing to hypoxia, and increasing the risk of thrombosis [52]. Thrombogenesis associated with SARS-CoV-2 infection may also be caused by direct viral binding to ACE2 receptors on platelets [55].

In short, both WCR exposure and COVID-19 may cause deleterious effects on red blood cells and reduced hemoglobin levels contributing to hypoxia in COVID-19. Endothelial injury may further contribute to hypoxia and many of the vascular complications seen in COVID-19 [66] that are discussed in the next section.

When SARS-CoV-2 first infects the human body, it attacks cells lining the nose, throat, and upper airway harboring ACE2 receptors. Once the virus gains access to a host cell through one of its spike proteins, which are the multiple protuberances projecting from the viral envelope that bind to ACE2 receptors, it converts the cell into a virus self-replicating entity.

In response to COVID-19 infection, both an immediate systemic innate immune response as well as a delayed adaptive response has been shown to occur [93]. The virus can also cause a dysregulation of the immune response, particularly in the decreased production of T-lymphocytes. [94]. Severe cases tend to have lower lymphocyte counts, higher leukocyte counts and neutrophil-lymphocyte ratios, as well as lower percentages of monocytes, eosinophils, and basophils [94]. Severe cases of COVID-19 show the greatest impairment in T-lymphocytes.

Baranski [96] exposed guinea pigs and rabbits to continuous or pulse-modulated 3000 MHz microwaves at an average power density of 3.5 mW/cm2 for 3 h/day over 3 months and found nonthermal changes in lymphocyte counts, abnormalities in nuclear structure, and mitosis in the erythroblastic cell series in the bone marrow and in lymphoid cells in lymph nodes and spleen.

Lymphocytes harvested from rabbits irradiated with 2.45 GHz for 23 h/day for 6 months show a significant suppression in immune response to a mitogen [99].

In 2009, Johansson conducted a literature review, which included the 2007 Bioinitiative Report. He concluded that electromagnetic fields (EMF) exposure, including WCR, can disturb the immune system and cause allergic and inflammatory responses at exposure levels significantly less than current national and international safety limits and raise the risk for systemic disease [100].

A review conducted by Szmigielski in 2013 concluded that weak RF/microwave fields, such as those emitted by mobile phones, can affect various immune functions both in vitro and in vivo [101]. Although the effects are historically somewhat inconsistent, most research studies document alterations in the number and activity of immune cells from RF exposure.

Exposure to microwave radiation, even at low levels (0.1 – 0.5 mW/cm2), can impair immune function, causing physical alterations in the essential cells of the immune system and a degradation of immunologic responses [107]. Szabo et al. [108] examined the effects of 61.2 GHz exposure on epidermal keratinocytes and found an increase in IL-1b, a pro-inflammatory cytokine. Makar et al. [109] found that immunosuppressed mice irradiated 30 min/day for 3 days by 42.2 GHz showed increased levels of TNF-α, a cytokine produced by macrophages.

In short, COVID-19 can lead to immune dysregulation as well as cytokine storms. By comparison, exposure to low-level WCR as observed in animal studies can also compromise the immune system, with chronic daily exposure producing immunosuppression or immune dysregulation including hyperactivation.

Epidemiologists, including those at the CDC, consider multiple causal factors when evaluating the virulence of an agent and understanding its ability to spread and cause disease. Most importantly, these variables include environmental cofactors and the health status of the host. Evidence from the literature summarized here suggests a possible connection between several adverse health effects of WCR exposure and the clinical course of COVID-19 in that WCR may have worsened the COVID-19 pandemic by weakening the host and exacerbating COVID-19 disease.

However, none of the observations discussed here prove this linkage.

Specifically, the evidence does not confirm causation.

This is taken from a very long document. Read the rest here: ncbi.nlm.nih.gov