Austria is becoming a nightmare for the unvaccinated 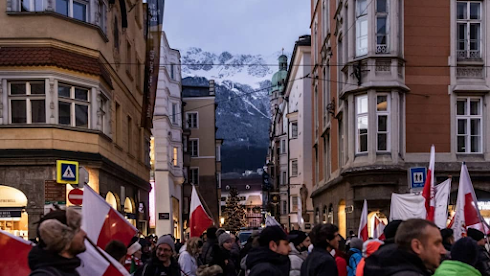 Across Austria, the streets are alive with the sounds of drums and cow bells. Ever since the Austrian government announced a vaccine mandate in November 2021, with vaccine refuseniks set to face fines, potential bankruptcies and possible prison sentences from February this year, demonstrations against the proposed measures have not ceased.

You can see why their fears are justified. Just a few days before the vaccine mandate was revealed, the authorities also stepped up their war on the unvaccinated by announcing that a new lockdown would be introduced – but that it would only apply to partially vaccinated and unvaccinated people. While these measures only lasted a short time before Omicron entered the stage and the entire country was plunged into its fourth lockdown, in mid-December the government announced that restrictions would be lifted, but only for the fully unvaccinated again.

While the ‘vaccine mandate’ sword hangs precariously over their heads before the measure is introduced in February, Austria’s large minority of unvaccinated people are essentially unable to participate in society. While the vaccinated are free to roam as they please, albeit with the proper paperwork, the only physical businesses the unvaccinated can visit are banks, food shops and pharmacies.

They barred from all other shops, businesses, theatres, restaurants, bar, museums. The list as long as it is depressing. Every shop window now has a sign warning those who haven’t had the jab to stay out. Some shops redouble the humiliation by inviting ‘unvaccinated’ clients to ring a bell and wait until they can be served – outside – in Austria, in winter.

Looking at international tables, it is not obvious why the leaders of Austria have chosen these extreme measures now. The country is doing neither better nor worse than its neighbours in terms of the percentage of fully vaccinated or deaths per 100,000 people. The EU average for full vaccine uptake is 69 per cent; for Austria it is 70 per cent according to the European Centre for Disease Control.

But in the meantime, the machinery of state steadily grinds on. In a novel Keynesian twist, the government is planning to open the spending spigots to ensure that the vaccine mandate plan goes ahead. And hundreds of new positions in the civil service are being created to man this new apparatus.

As Die Krone Zeitung, a national daily, explains, ‘there will be a lot of work for all of them’ and over the next two years ‘considerably more staff will be needed’ – with the government expecting to issue 1.8 million penalty orders to the unvaccinated in 2022 alone.

When you exclude the under 14s, who are legally excluded from being fined, the Austrian authorities will have to fine a substantial proportion of the country’s population who are not fully vaccinated. The fines start at €600 but will rise to €3,600. The government has said that the fines should not be considered a one off and may continue to be applied to individuals who do not comply.

The nine regional states that make up the Austrian Federal Republic are also recruiting ahead of the vaccine mandate roll-out. For instance, the Salzburger Nachrichten, a regional newspaper, reports that its regional government wants to ‘recruit retired police officers for Covid controls’. The criteria: applicants should not be older than 70 and should have been previously active in the field. In an aging country, it seems as though politicians have found a clever way to pay their voting base to harass the young.

Perhaps to make the whole thing less distasteful, the administration is promising that at the moment ‘physical coercion is not envisaged’, and that the fines will not ‘be converted into a custodial sentence’, having said the opposite just a few weeks ago.

But in a surprising escalation, the Socialist Party of Austria (SPO), one of the country’s two major parties, is calling for the unvaccinated to lose their jobs as well as their entitlement to unemployment benefits and social assistance in Vienna. In short, there are plenty of calls for the government to revisit the idea of imprisoning those unable or unwilling to pay.

As each day takes Austria closer to the February 1 vaccination mandate deadline, murmurs of hope tinged with despair gallop through the lines of irredentists. An expert here says that Omicron might make the mandate unnecessary; a report there tells of technical difficulties that might delay the stay of execution. In no time, though, politicians rise up to crush these hopes. Nothing will come in the way of the mandate.

The exceptionally large demonstrations now regularly meandering through the ancient city streets of Austria’s state capitals will not stop the mandate. Nor the staggering and growing number (currently over 108,000) of individual messages written by concerned citizens to their parliamentarians; nor the admission from the Constitutional Minister Karoline Edtstadler that the introduction ‘of general compulsory vaccination naturally encroaches on fundamental rights.’

Already in Austria an individual must show his ‘papers’ to anyone who demands them either in shops, theatres, restaurants, bars, and much more regardless of his vaccination status. Every interaction with a third party is now official.

The state is imposing itself on both the vaccinated and the unvaccinated whilst the freedoms of both are trampled underfoot. Compliance is now the only game in town.