Serbia has cancelled a huge deal with Rio Tinto, an Australian firm, following the deportation of Novak Djokovic from Australia.

Serbian Prime Minister Ana Brnabić revealed on Thursday that the eastern European country had abandoned a profitable lithium mining venture with Rio Tinto, only days after Serbian tennis star Novak Djokovic was kicked out of the Australian Open for his position on coronavirus vaccines.

In a televised address on January 20, Brnabić declared that the Serbian government had “fulfilled all the demands from the environmental protests and have put an end to Rio Tinto in the Republic of Serbia,” referencing environmental worries highlighted by citizens, including Djokovic.

“All decisions and all licences have been annulled. As far as the project Jadar is concerned, this is the end,” the prime minister added. 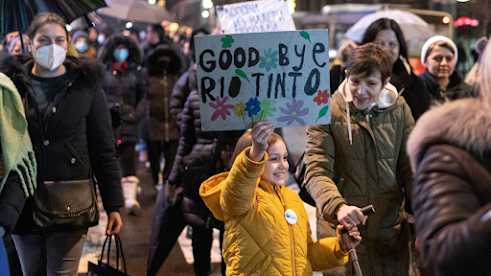 Rio Tinto’s main venture, the Jadar project in western Serbia near Loznica, was to become the company’s flagship project, with the mining behemoth having already invested $450 million. Excavating the reserve was expected to be worth $2.4 billion, putting the business among the top 10 lithium suppliers in the world.

Rio Tinto claimed the government’s announcement to abandon the project caught them off guard and they were “blindsided.”

Rio Tinto’s stock dropped 2.2 points when the contract was terminated, culminating in a $5 billion drop in the valuation within 48 hours of the announcement.

The mining behemoth expressed that they were “extremely concerned” and said it is discussing the situation with its attorneys.

“Throughout our work on the Jadar project, we have always operated in compliance with the laws of the Republic of Serbia,” the company said in a statement. “Rio Tinto is reviewing the legal basis of this decision and the implications for our activities and our people in Serbia.”

Djokovic supported protests against the proposed excavation of the Jadar site in December, posting photographs to his social media pages with the message “clean air and water are the keys to health.”

Brnabić stated Thursday that ministers are “listening to our people and it is our job to protect their interests even when we think differently.”

The announcement to scrap the venture comes only days after Australian officials decided to deport the world’s top tennis player over a dispute over his COVID-19 vaccination status.

Djokovic went on to win an appeal in the Federal Court Circuit days after the Australian Border Force (ABF) refused his visa upon entry into the nation in early January, forcing him to be freed from mandatory isolation.

As the ABF cancelled the player’s visa, Judge Anthony Kelly remarked that “rules were not observed,” giving them only 30 minutes to comply with his ruling.

Although fulfilling the state of Victoria’s and the tournament’s drastic medical exemption rules and having a court appeal on his side, Australia immigration minister Alex Hawke decided that sustaining Djokovic’s visa revocation was “in the public interest to do so.”

Hawke judged that Djokovic’s “ongoing presence in Australia may lead to an increase in anti-vaccination sentiment generated in the Australian community,” instead of basing his judgement on medical research.

At the time, both Brnabić and Serbian President Aleksandar Vučić criticized the Australian authorities, calling it “scandalous” and a “witch hunt.” Commentators suspected that the suspension of the mining deal was done in revenge for the hostilities involving Belgrade and Canberra over Djokovic’s expulsion.