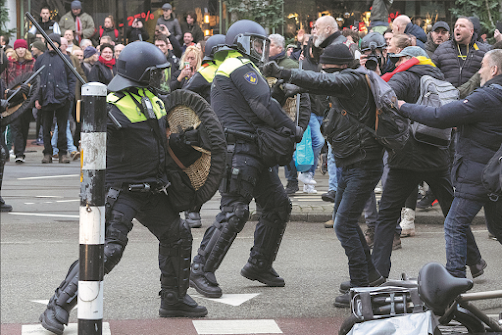 But it's all to keep us safe

Riot police with batons and shields broke up a crowd of several thousands who had gathered in Amsterdam on Sunday to protest against COVID-19 lockdown measures and vaccinations. The brutal police crackdown sparked concerns from the United Nations.

Thousands of people defied a government ban on assembling and demonstrated against the government's coronavirus restrictions in the Netherlands' biggest city, leading to clashes and 30 arrests.

The demonstrators rallied in one of the city's main squares, despite Dutch authorities banning the protest beforehand.

Police said anti-riot officers had to use force after protesters refused to leave the square despite a warning. Four officers were also injured, a police statement said.

Video clips of the clashes went viral on social media on Sunday, with one showing protesters being chased and mauled by police dogs, beaten with batons, the other capturing the moment a police officer wielded his baton to hit a man's face.

At the protest against government restrictions in Amsterdam, Netherlands the police used dogs on protesters. pic.twitter.com/bESSeZZwMo

Nils Melzer, the UN Special Rapporteur on Torture, called for evidence of the police brutality.

"In preparation for my official visit in 2022 to #Netherlands, #Poland& #France focusing on #PoliceViolence, I invite victims, witnesses &NGO to submit verifiable evidence (Eng/Fre) on this& other incidents: sr-torture@ohchr.org (confidentiality assured)," he said in a tweet on Sunday.

Public gatherings of more than two people are banned under restrictions imposed in the Netherlands to prevent the spread of the Omicron variant. But the protesters, who mostly did not wear face masks or abide by the 1.5-meter social distancing rules, ignored the rules on Sunday to hold the demonstration.

The local government said that police had indications that some demonstrators might be planning to attend the demonstrations "prepared for violence".

Prime Minister Mark Rutte announced a lockdown on Dec 18, one week before Christmas, in response to a fresh wave of COVID-19 infections fueled by the Omicron variant. Nonessential shops, restaurants, bars, cinemas, theaters and museums will remain closed until Jan 14 and schools until Jan 9.

Due to the surge in cases and adverse weather, more than 3,800 flights were canceled around the world on Sunday, more than half of them in the United States.

Over the week ending on Saturday, the US, hardest-hit by the pandemic, reported more than 2.7 million new cases, according to Johns Hopkins University.

The Christmas and New Year holidays are typically a peak time for travel, but the rapid spread of Omicron has led to a sharp increase in infections, forcing airlines to cancel flights.

US Secretary of Defense Lloyd Austin announced on Sunday that he tested positive for COVID-19.

Kuwait has called on its citizens to avoid travel to several European countries hit hard by Omicron.

The Kuwaiti Foreign Ministry said they should "delay their trips "generally and, in particular, to France, Germany, the United Kingdom, Spain and Italy.

On Monday, the Republic of Korea confirmed its first two deaths linked to Omicron. 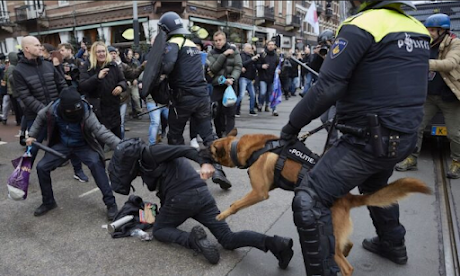 Agencies and Xinhua contributed to this story.