Can the Bluetooth phenomenon be verified? 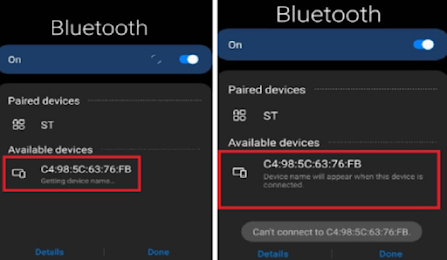 Firstly, my identity is not important, but I am a retired computer engineer.

I'm here to try and clarify, at my humble level, a part of the Bluetooth phenomenon that vaccinees exhibit. So I wanted to get to the bottom of it and verify it for myself:

The phenomenon is real when you have the right phone or programmes. I will try to explain the tests in a language accessible to all:

I tested about ten makes / models:

iPhone, Samsung, Sony are restricted. They do not allow to discover the MAC addresses of those vaccinated. According to various reports on the internet, it would be possible to install Bluesniff-type software to detect them. But as yet, I have not been able to carry out this test.

After almost giving up, I found a Xiaomi Redmi note 10s, from one of my daughter's friends, and did a little procedure:

Go 'Back' and start the Bluetooth scan. Display the list of the other devices and you will see the vaccinated MAC addresses if they are close. Remember, the Bluetooth captures within a radius of 10/30 meters maximum (depending on the obstacles).

All you have to do is go to a field where there is no Bluetooth signal, and make the vaccinated people come closer and relaunch the investigation. A MAC address will appear, like: 4D: 9E: 45: FE: A3: BD

It seems that the handling is the same with Huawei, but I have tried with an old Honor 5c and it does not work.

From this point on, if you have a Xiaomi or another phone that allows this detection, I strongly advise you to remove your SIM card and disable your phone's Wi-Fi and Bluetooth. In fact, it is not impossible that a future update will make this detection impossible.

Your phone has become a "living" proof of what is happening. That is, the tracking of human beings without their consent.

I have tested on Apple Mac and on Microsoft Windows. Here it was impossible to detect any Bluetooth signal from the vaccinated. I have concluded that the Bluetooth device driver is "bypassed" so as not to discover these unassigned MAC addresses.

But it does work on Linux. I successfully tested the vaccinated scan with Kali Linux, a security / hacking oriented version that allows to see these addresses as well.

The manipulation is too complicated to explain here, but I appeal to computer scientists, engineers, and geeks passionate about Linux to install this version (or others if they work) and show the world the reality of this vaccination.

If a few worthy hackers could find out how to unlock the Windows capping, for example, this would reach millions of people at once, because everyone could take the test and find out for themselves what is currently happening.

Whether on a phone or on a computer via Linux, here is the "behaviour" of the MAC addresses of the vaccinated:

1. MAC addresses are not permanently discoverable, but rather, are intermittently silent. During a test with three vaccinated people, it seemed to me that the more stressed / anxious they were, the less the Mac address appeared. This is only a subjective assessment, but it is worth investigating further.

2. MAC addresses are not fixed. They are dynamic, so they change in an interval yet to be determined.

3. The MAC addresses of the newly vaccinated seem to be more "broadcast", which means that they are more quickly traceable and that the signal is stronger and longer lasting. This point must be confirmed by a strict protocol.

4. MAC addresses are not "pluggable". No known protocol seems to be able to connect them.

We have very little time (a few weeks?) to spread the truth throughout France, because we have no doubt that our government is going to accelerate its vaccination policy, since we irrefutably know that it is in fact, and at the very least, of mark the population.

This certainty now leads to other questions, because, according to some scientists and doctors, this vaccines could also affect fertility and immune competence.

If this is not a conspiracy, it certainly manages to look like one.

It is also interesting to note that, according to these first principles, only Chinese cell phones would allow the addresses of those vaccinated to be seen. None of the western telephones allow to see the vaccinated natively (that is, without adding applications or debridement). Is it a coincidence or just a difference in standards that would only affect the Chinese devices, or are we in the middle of a new kind of war between the superpowers?