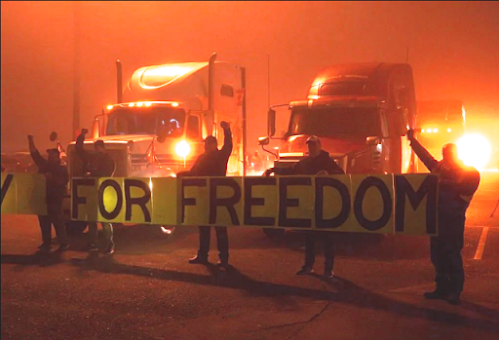 A convoy of truckers and others opposed to public health restrictions is on its way from British Columbia to Parliament Hill for a “freedom rally” this weekend against mandatory vaccinations in Canada, and Transport Minister Omar Alghara is not happy.

“I am concerned about the small number of far-right, vocal opposition that is polluting the political debate, It’s something that we all need to be aware of, we all need to call out.

Alghabra also said the large grocery store chains and other retailers have assured him they have plenty of goods to provide their customers, despite some labour shortages and supply chain bottlenecks caused by the COVID-19 pandemic.

But Alghabra did acknowledge that pandemic-induced supply chain disruptions and the role truckers play in ensuring the smooth flow of goods into the country are serious issues deserving of “rational and meaningful” debate and “even criticism” of government policy.

Even before the Trudeau government brought in a mandate on 15th Jan that requires truckers crossing the border to be vaccinated, Canada was short 23,000 truck drivers. The lack of drivers — brought about by tough working conditions and at times onerous regulations — may have existed before the mandate, but this mandate is making things worse.

The Canadian Trucking Alliance has estimated that about 15 per cent of truckers — as many as 16,000 — are not fully vaccinated against COVID-19, but it has shamefully lost its nerve and denounced any protests on public roadways, highways, and bridges and has urged all truckers to get inoculated because the Government said so.

A day after refusing to say whether he supported the truck convoy heading to Ottawa, Conservative Leader Erin O’Toole appeared in a Facebook live event Tuesday evening to say he understands why many truckers, especially independent ones, are upset.

“You can understand why there’s some frustration and why people are protesting,” O’Toole said.

He argued that Prime Minister Justin Trudeau is more focused on dividing people with his policies, putting the country’s supply chain under greater strain when he could simply allow unvaccinated truckers to use rapid tests.

“I want to say this: In Canada, people have a right to peacefully protest, people want to work and are worried, people are tired after two years of a pandemic,” O’Toole said.

On Monday 24th Jan — even as some of his MPs, including predecessor Andrew Scheer, praised the convoy for defending freedom and liberty — a circumspect O’Toole argued it wasn’t up him as leader of the official Opposition to meet with protesters on Parliament Hill.

The Canadian Chamber of Commerce has urged the government to give truckers more time to get vaccinated while the Canadian Manufacturing Coalition hasn’t lost its bottle like the Canadian Turcking Alliance and has called for the vaccine mandate to be scrapped entirely.

Among the truck drivers in Canada who are slow-rolling in convoys across the country to protest the COVID-19 vaccine mandate at the U.S. border, will be Ontario owner-operator Brigitte Belton, who until recently regularly moved freight between the U.S. and Canada.

Since Saturday 22nd Jan, she and other drivers who haven’t been vaccinated against COVID-19 have been barred from crossing the border.

“I’m literally going to lose my truck, my house, my car, my savings and live in a cardboard box,” said Belton, who drives a 2015 Mack Pinnacle.

Hundreds of trucks set off as part of the Freedom Convoy on the 23rd Jan, while local protests have already snarled traffic at some border crossings. Organisers say thousands of drivers have signed on along with supporters from outside the industry.

For Belton, who questions the safety of the vaccines, the U.S. and Canadian mandates go too far.

“We’re not anti-anything,” she said. “We’re pro-choice. If you want the vaccine, go get it. I’m not stopping you. But why do you have the right to tell me what I actually ingest in my body?”

“I’ve got questions all over the place about this shot,” she said.

“If he had just left it as [it is] now — you don’t need to be vaccinated to cross the border — this probably all never would have happened,” Belton said of Trudeau. “But when he switched it, he pissed off truckers and we went, we can’t just fight for us now, we’re fighting for everybody.”

Trudeau brushed aside anger over the vaccine mandates, claiming that “90% of truckers are vaccinated” — and blamed Conservative Party politicians for stirring fears about disruptions to the supply chain.