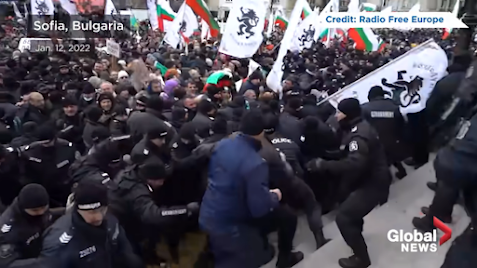 Hundreds of people gathered outside the Bulgarian parliament building in the capital, Sofia, on Wednesday.

The protest, staged by the nationalist Vazrazhdane (Revival) party, decried the standing anti-coronavirus restrictions, including the green pass system put in place by the country’s authorities.

The protesters were seen carrying Bulgarian flags and placards reading “I want a normal life,” “Hands off our children” and so on. The crowd chanted “Freedom, freedom,” as well as other slogans.

The rally descended into scuffles against law enforcement officers as the crowd tried to breach the parliament building, pushing away the police line guarding it. Protesters were unable to enter, as its doors were locked and barricaded with tables from the inside by the parliament’s security.

The botched attempt to breach the legislature reportedly prompted minor scuffles inside the building as well. An MP with the Vazrazhdane party reportedly tried to remove the tables and unlock the doors to let the protesters in, arguing that the crowd was within its rights to enter the parliament.

The scuffles outside the building left four police officers injured, according to the country’s Ministry of Interior. Several protesters were detained during the incident, footage from the scene suggests.

The protest has been acknowledged by the country’s Prime Minister, Kiril Petkov, who said he would have been “happy” to go to parliament square to talk to the protesters. The official was unable to do so since he is currently in quarantine after coming into contact with somebody infected with Covid-19.

“If there are people from their protest who are known to have professional qualities, we will be happy to hear their ideas for a more constructive way to manage the Covid crisis,” Petkov said, adding, however, that the health pass system itself cannot be dropped.

Since the beginning of the pandemic, Bulgaria has registered nearly 800,000 Covid-19 cases including more than 31,700 deaths. While the figures are significantly lower than recorded by the worst-affected nations worldwide, the per capita rate is quite high for the nation of some seven million. Currently, the country is enduring a new wave of coronavirus, with new daily infections reaching a record high of 7,062 on Wednesday.