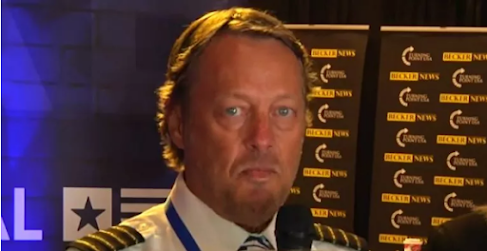 Pearson said that ‘vaccinated pilots are a flight risk’ as some are going to work with “crushing pains in their chests and heads.”

His revelation comes after US Army whistleblower Theresa Long testified late last year that she had to ground three out of three pilots in one morning due to vaccine injuries.

Pearson got the COVID shot against his better judgment because of an employer mandate. He was forced to go to the emergency room shortly after as his heart began pounding ‘out of his chest’.

“I went to the ER where they quickly hooked me up to EKG IVs, did blood work quickly and determined that I was in atrial fibrillation. It’s the major cause of stroke.”

I could have stroked out at 100 feet while trying to land an airplane. I could have just pushed down on that stick before the person next to me could do anything. [Then] it’s all over for a lot of people.”

What Pearson then revealed was truly shocking, saying that he knows of several active pilots who are injured by the jab but stay quiet out of fear of losing their jobs:

“There’s a number of pilots out there who are fearful to come forward and speak… They are fearful of retribution.

There are guys that are going to work with crushing pains in their chests and their heads.

They’re scared that they’re going to lose their careers.”